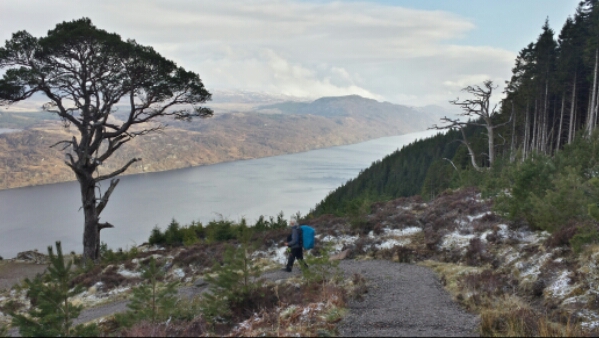 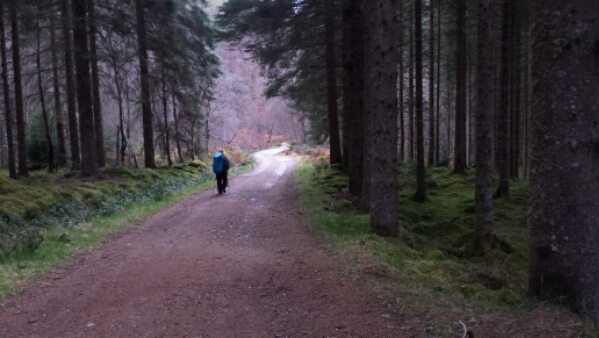 A beautiful morning following forestry tracks with the sun shining through the tall trees. 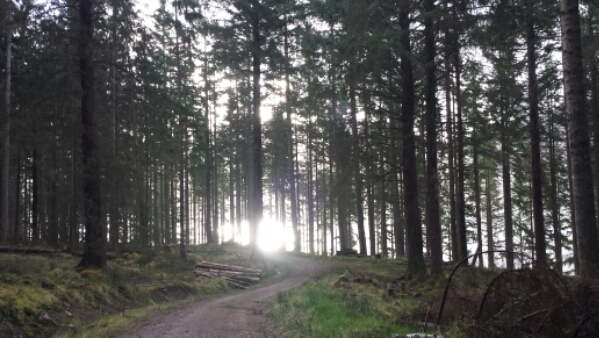 The track snaked along for several miles till we came to Invermoriston where we stopped for a short break in a bus shelter. Every now and then through the morning we had a few flakes of snow. 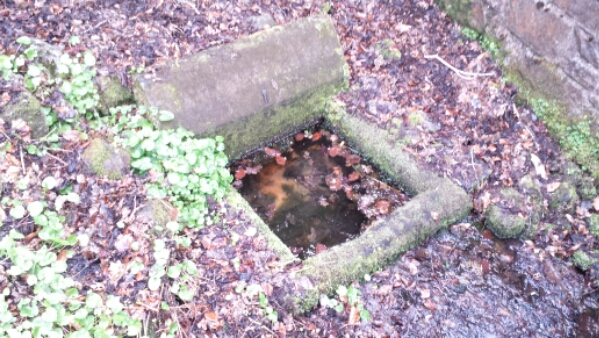 Just a little further along the road we came to St Columba’s well. According to a small plaque nearby, a spring or well has been on this site since early Pictish times. Until the sixth century AD the water was considered to be poisonous causing boils and ulcers to appear if splashed on the skin. Saint Columba, on his way to see a great Pictish king, blessed the water and from that time onwards it became clear and was also said to have curative powers. The spring may also have been the source for Loch Ness but apparently, that is another story! 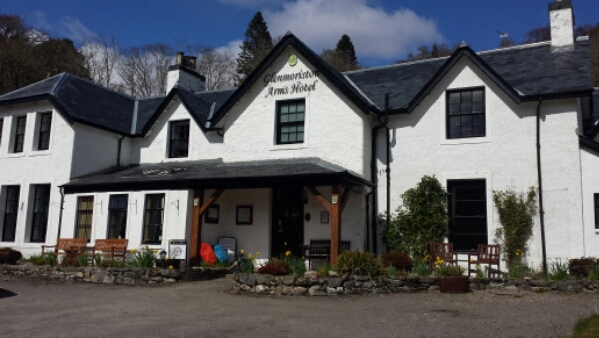 A little further on we came to the Glenmoriston Hotel so we went in for our pot of tea for two! Lovely hotel and friendly staff too. 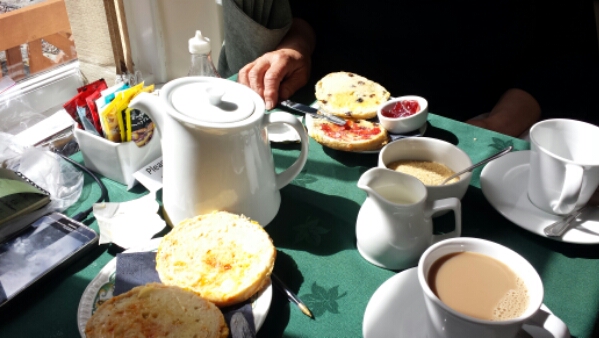 We stayed for a while and we had a pot of coffee and a scone each too. While we were in the hotel the weather alternated between bright sunshine and heavy snow and sleet.
We were cosy inside the hotel and we were able to charge our phones up and I also posted yesterday’s blog. We met a couple who were staying at the hotel overnight but I forgot to get your names sorry. Maybe we will meet up again. We also met a couple we had chatted to the day before in the Lock Inn at Fort Augustus. Hugh and Alison, it was good to meet you again and hope you enjoy your walk to Drumnadrochit tomorrow.
We picked up a few things from a little shop opposite the hotel and then resumed our walk. 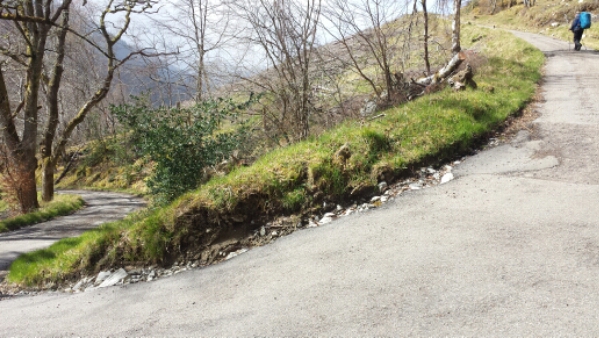 The path was a tarmac lane snaking up a very steep hill so the going was very slow! We rested on a bench and admired the view for a while then continued upwards until we came to a plaque next to a fairly new looking path that went off to the left. We had the choice of taking the high route which was a little shorter but climbed more steeply and promised some amazing views, or the low route which didn’t go quite so high and is more suitable for cycles and horses. This time we chose the high route and I can honestly say that it was the best choice for us.

We gradually climbed higher and higher but the path was good, making progress a little easier even though the pace was slow. We stopped for a break and we could see the new sculpture that had been erected recently just a little further on. It started snowing again – just a few flurries at first then heavier for a while. We walked on upwards towards the sculpture. 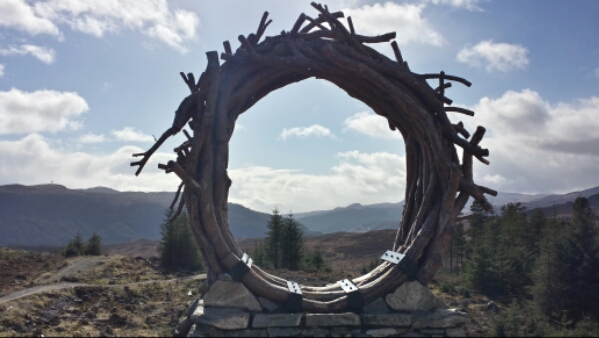 It is called The Viewcatcher and is made from Caledonian pine and local stone. The “eye in the sky” was designed to highlight the stunning views. We could see the snow clouds coming across then patches of blue sky so we decided to wait to see if we could get a sight of Ben Nevis in the far distance. While we were waiting, we each made a sculpture of our own. 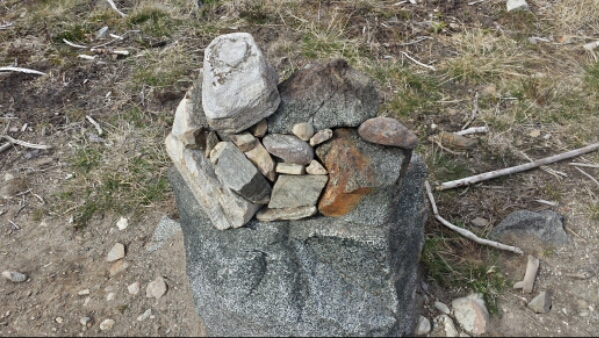 Mine was made from stone and Dave used both stone and wood. 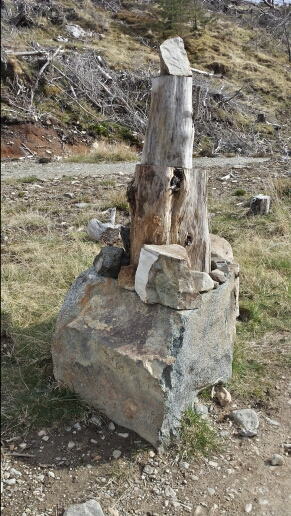 We both had a great time. We managed to get a reasonable view through the Viewcatcher too.
By this time it was snowing quite heavily and we found ourselves climbing higher along a narrower path in high winds. 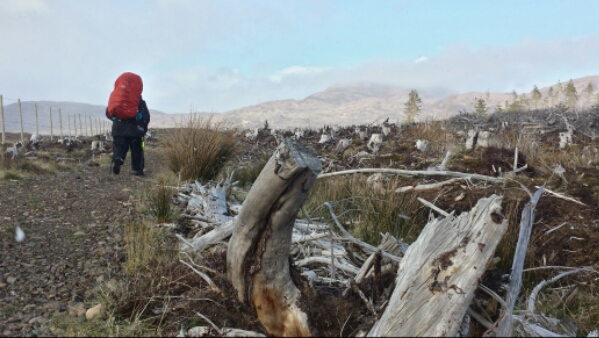 We climbed higher and higher until we reached the viewpoint at the top near Creag Dhearg a height of 1555 feet. What a view – quite breathtaking. 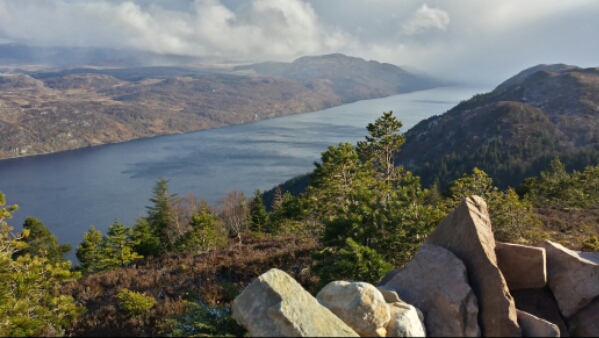 We could see along Loch Ness and the hills and mountains all around. Looking at the dark shapes on the loch you can see how people claim to see something there. We were tired but pleased that we’d made the effort to take the high route. 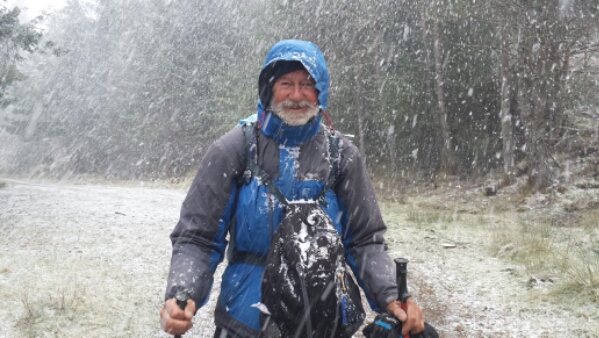 The snow storms kept coming – one minute blue skies and sunshine and the next a whiteout! The path was torturous as it wound up and down along the high ground and we were relieved when the path seemed to level out a bit more although, just when we thought we’d finished, it went up and down again! Time was getting on and we were looking for a place to camp. Unfortunately the ground either side of the path sloped steeply and we could find nowhere that was even slightly level so we had to walk on. It was almost 7.30 by the time we found somewhere but the tent was soon up and we were snug inside. 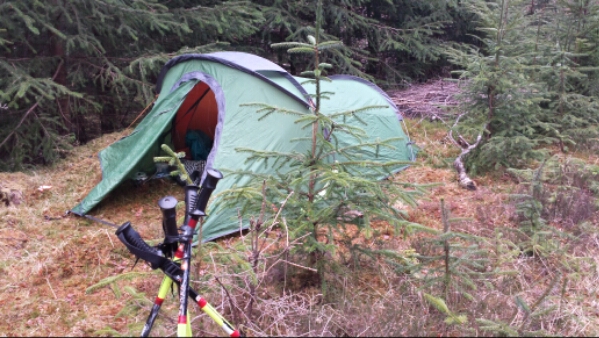 Dave made cheese and onion toasties for supper – thanks Dave. We phoned our daughters to let them know that we were safe. It was good to hear their voices – missing you Kate and Emma and looking forward to seeing you all soon.