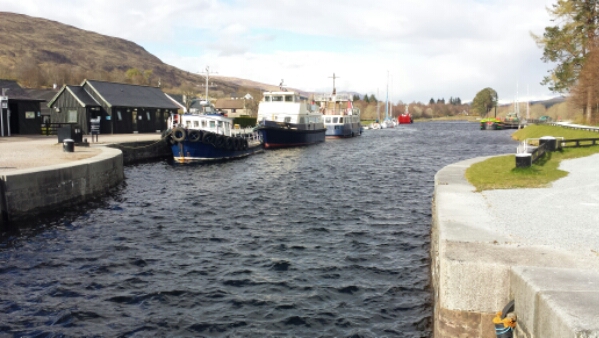 Breakfast at the Clan MacDuff was leisurely. I had cereal and Dave fruit and muesli: then we both chose the “Heelander” breakfast – haggis, potato scone, bacon, sausage, egg, mushrooms, beans, tomato, hash brown and fried bread. 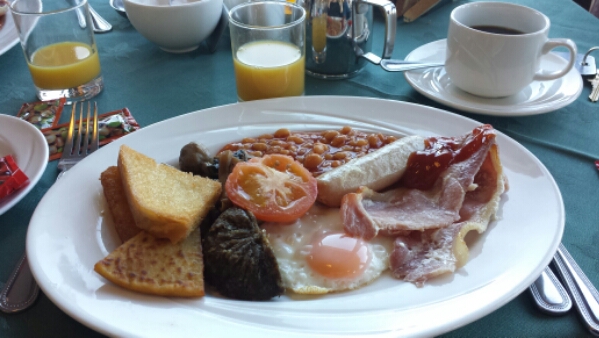 We even had room for toast and marmalade!
Brian from Woody’s Taxi came to pick us up at 11.30 and drove us back to Tesco where he had picked us up yesterday. He also gave us a donation for Macmillan – thanks Brian.
Picked up a few things from Tesco then walked along High St where Dave bought some waterproofing spray for the tent. 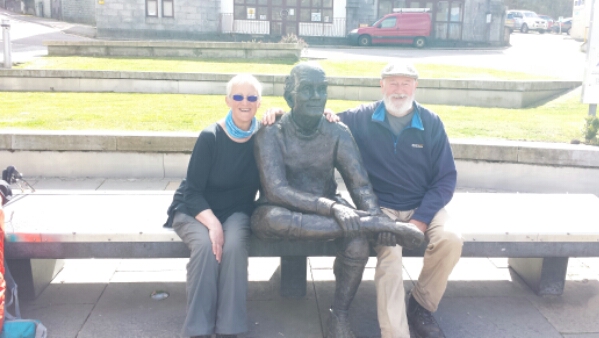 We had our photo taken, by Aleena, sitting with the statue of the man with sore feet – thanks Aleena.
There were too many people there yesterday to get the classic shot. We called in to Wetherspoons for a beer and then walked back along the High St where we met Nicolai who had finished the WHW yesterday with his friend Jonas. Jonas has already returned to Bavaria and Nicolai will be going home tomorrow – safe journey Nicolai and good to have met you both. 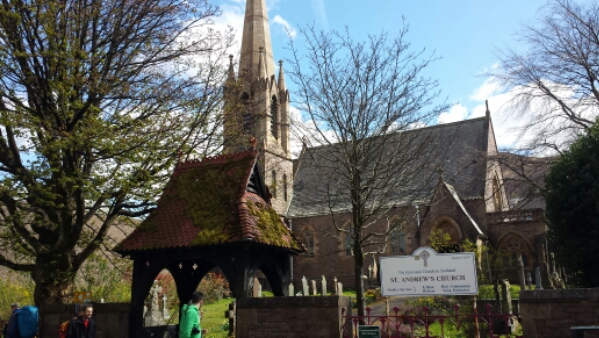 We went into the church of St Andrew for a while. 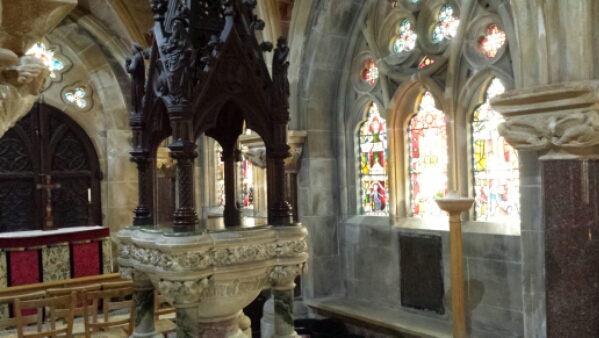 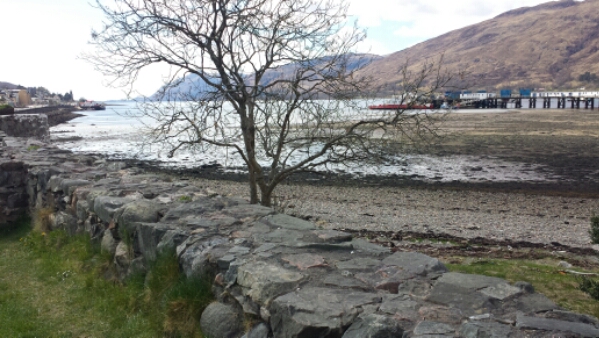 The beginning of the Great Glen Way is at the site of what is left of the old fort of Fort William. The fort’s purpose was to keep the turbulent highland clans in check and to stop local Jacobites helping the Stuart royal family. We met two ladies from Sweden there who had completed the WHW yesterday and plan to start walking the Great Glen Way on Sunday. 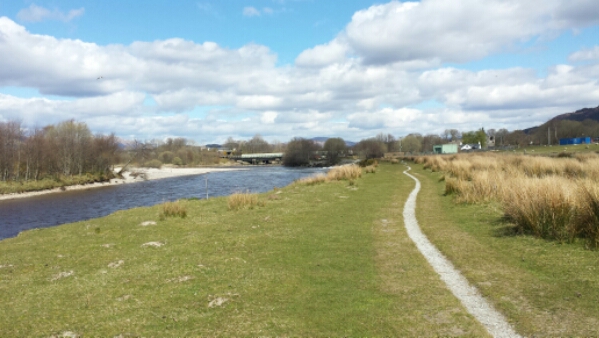 We began walking at 2pm and the path took us through a housing estate and along the edge of the loch and we stopped for a break at Inverlochy Castle. 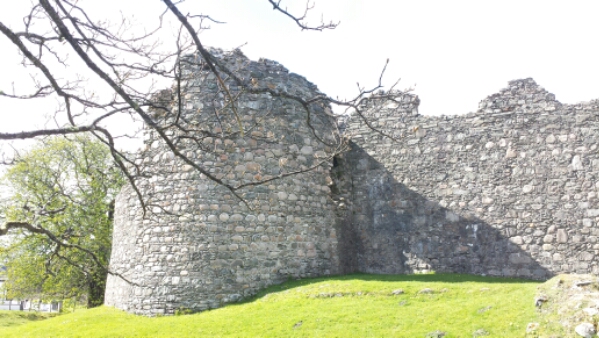 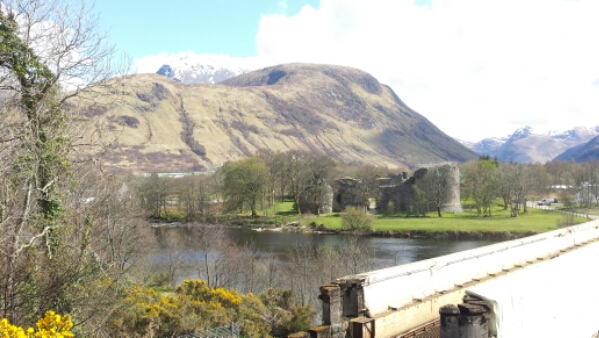 We crossed over a river and walked for a mile or so before joining the Caledonian Canal at Neptune’s Staircase – a flight of locks which carry ships down to Loch Linnhe and then out to sea. 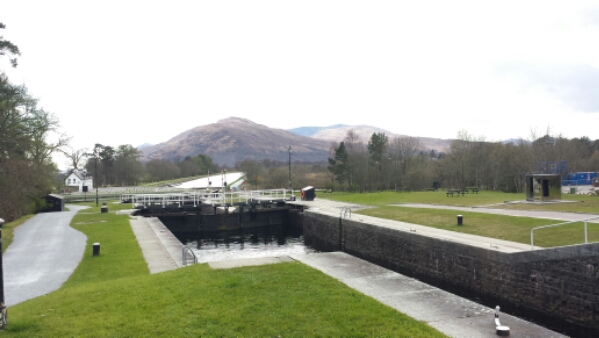 We met two cyclists, Veronica and Tony who had been the support for a group of Jogle cyclists. Thank you for your donation both.
We stopped for a pot of tea for two at The Moorings Hotel Bistro then started walking again around 5pm. Very easy walking along a well compacted stone track. We walked for an hour or so then found a good place to camp for the night – sheltered amongst trees with a wonderful view of Ben Nevis. 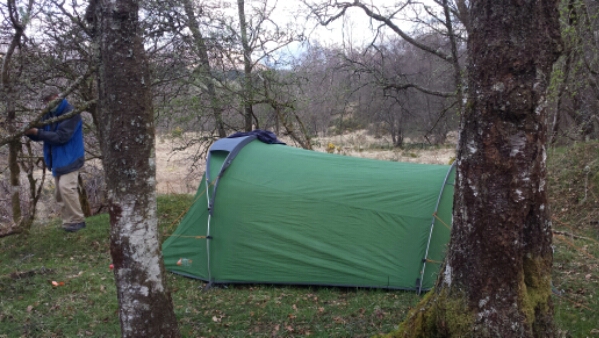 Dave made supper ( spicy tomato pasta with garlic bread and a rocket salad ) while I wrote this blog. It’s been a lovely day and we are looking forward to the rest of our journey along the Great Glen Way. 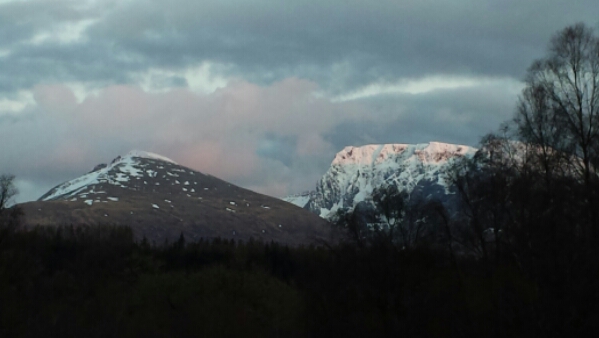