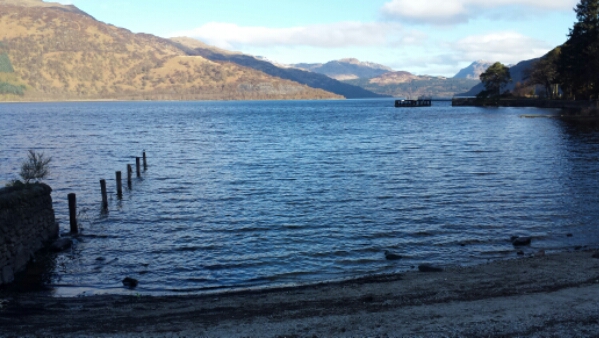 Saturday 16th April 2016 – 912.4 miles
Back to our usual early start today – ice on the tent this morning but an amazing sunrise! 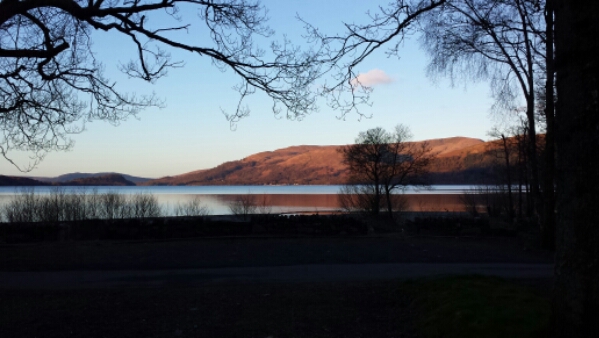 We left Salochy at 6.45 – road walking for the first few miles and we took our 900 mile selfie today near the Rowardennan Hotel overlooking Loch Lomond. 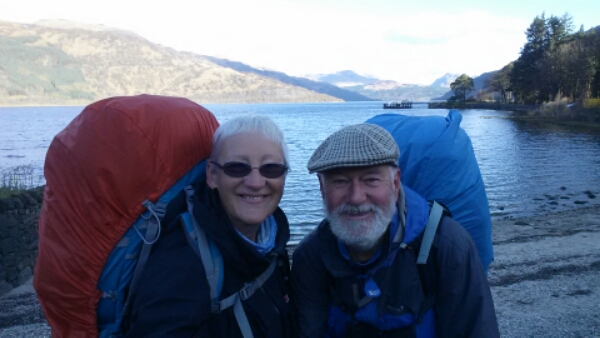 Joined the footpath again at Rowardennan Youth Hostel. The forestry track took us through woodland and along the loch in places. 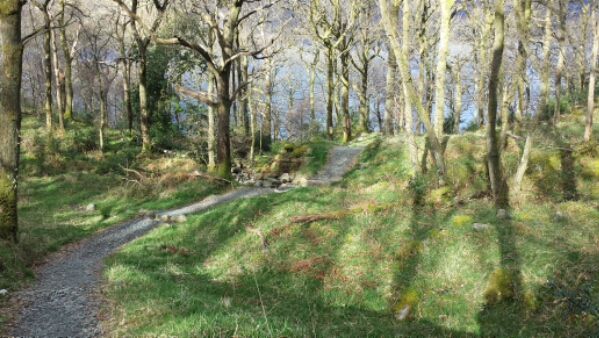 The path split and the main track carried on uphill and the path went downhill. It was at this point that we should have remembered the advice we were given a couple of days ago – “For the first four miles take the “high road” along the forestry track rather than the low path.” they said. We took the other path! Big mistake! 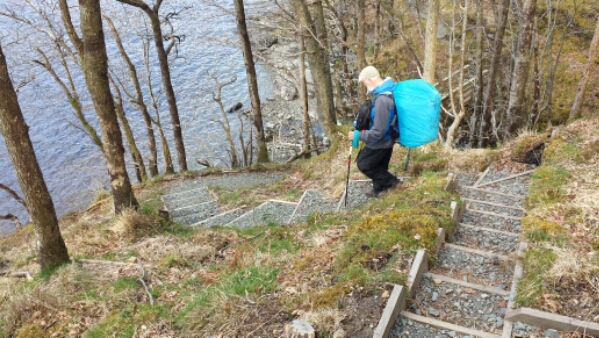 We had a difficult morning clambering up and down rocky paths. The footpath had recently been repaired and new steps put in – some quite high and difficult to climb up with a heavy rucksack. 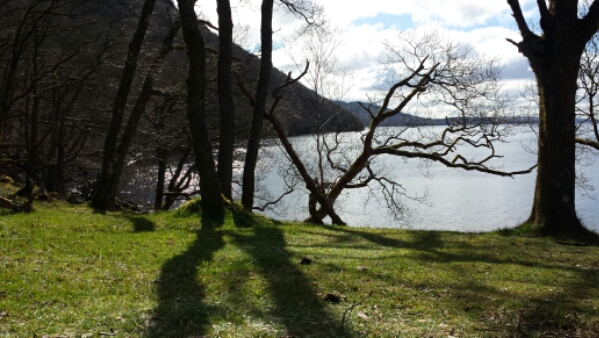 Having said that however, we were treated to stunning views of the loch and hills behind – so not all bad! We met Bill from Wyoming who was walking the West Highland Way (WHW). He didn’t know where Land’s End or John o’Groats was though. 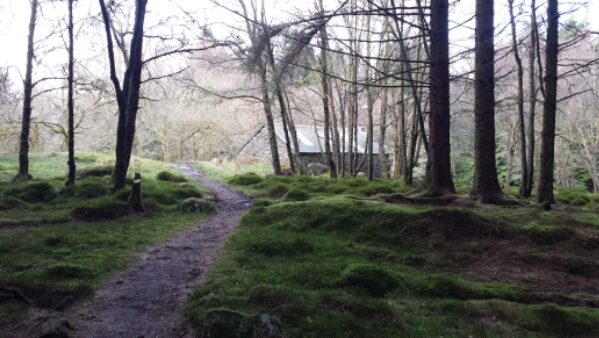 The footpath became a walk through the woods and it wasn’t long before we saw a small cottage tucked away in the woods – it was a bothy – called “Rowchoish”. 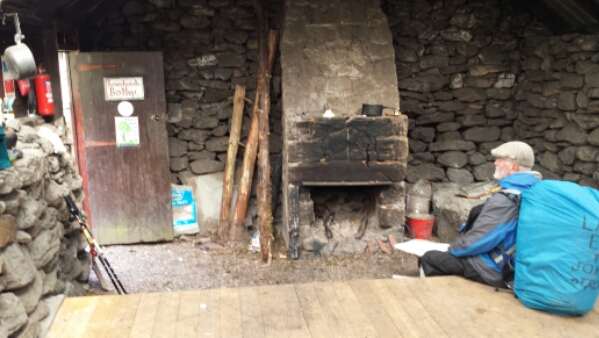 We went inside for a look around. Great place to stay for walkers – a fireplace and wood ready to make a fire and also a few pots and pans and the odd packet of food left by previous users. Their website at www.mountainbothies.org.uk states that “The Mountain Bothies Association was founded in 1965 and exists to maintain remote buildings for which the owner has little or no use, yet remain important to walkers and others who make use of the shelter that they provide.” We would like to have stayed but it was a bit early in the day. 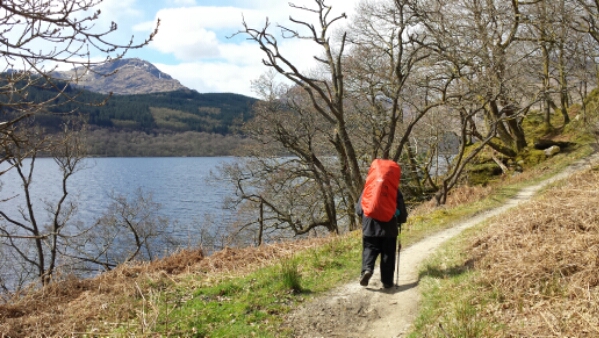 The path returned to the forestry track for a while before the track ended and we found ourselves on a rocky path again. More ups and downs again. We rested quite often because the going was strenuous in places. 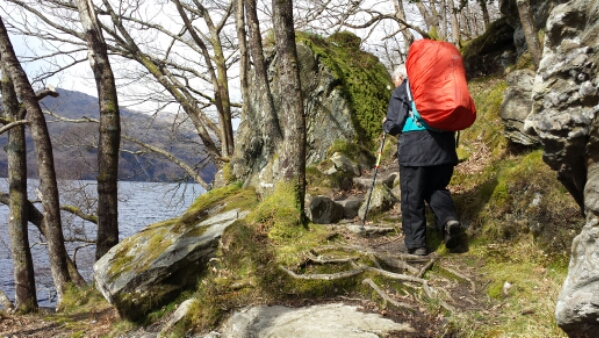 We met a couple of cyclists coming the other way looking quite tired! Not surprised – hard enough walking let alone trying to cycle this section. Brian and Richard told us that there was a hotel not far away and that the footpath was even more rocky and difficult to walk further on. They did tell us however that there was another bothy about 4 miles past the hotel. We thanked them and wished them luck. 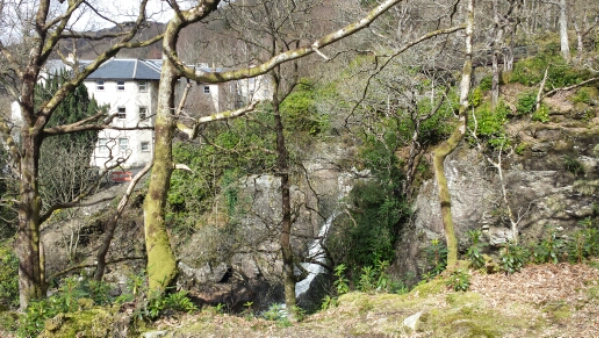 The Inversnaid Hotel was a welcome sight after two more miles of clambering up and down the rocky path. Nice hotel and very welcoming and friendly too. We stopped for a break – we both had a pint of beer and a bowl of chips.
We met Neil again – he is also walking the WHW. We chatted about the day and our walk and where we were heading for the night. Neil was heading for Inverarnan – a little further than us. He gave us a donation – thanks Neil. No doubt we’ll see you again.
We decided to bite the bullet and walk on to the bothy – another four miles of arduous scrambling over rocks etc. 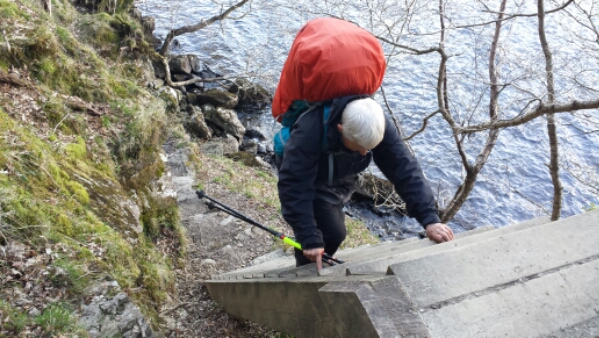 We noticed the difference between the two sections either side of the hotel. This section had not yet been cleared and repaired after the winter storms. The path was quite precarious in places but we took it slowly. 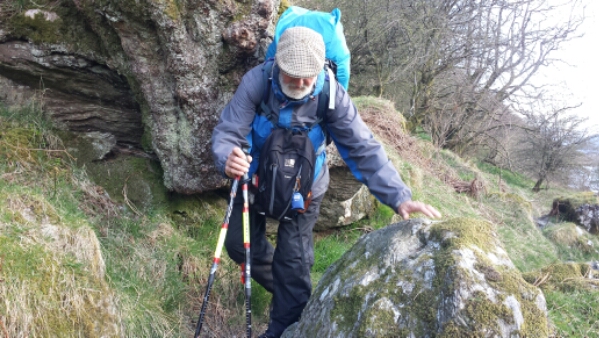 We came to a small cottage with an honesty box outside selling small cookies and fruit. We bought an apple and a banana for £1. Not long after we met David and Sheena who were out for a walk with their dog – good to meet you both and enjoy your retirement. 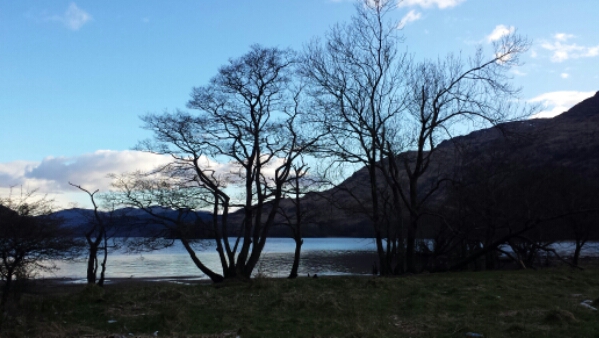 Eventually our struggles ended and we came to the shores of the loch once more and we had a short walk through woodland before arriving at the bothy “Doune”. 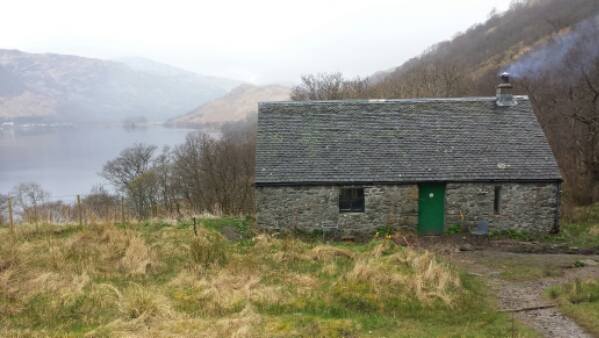 We saw smoke coming from the chimney and went in. Two lads were already there sitting by a welcome fire. It wasn’t long before we were settled for the evening – so nice not to have to put the tent up. 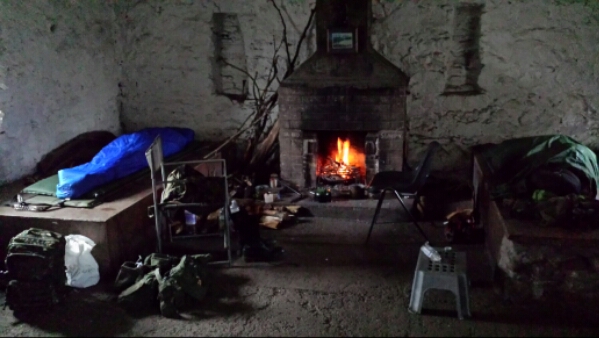