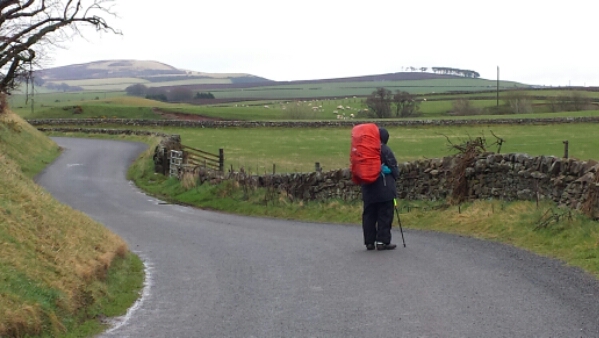 Having camped for the night in pine woodland we were careful not to fold too many pine needles up with the tent!
There was a spring in our step as we started out – later in the day we had arranged to meet our friends in Lanark where we were to be whisked off to their home for a few days break. 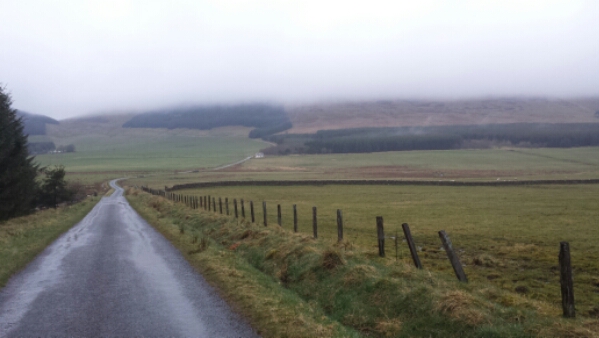 Despite the rain it was easy walking again along quiet lanes through the Tinto Hills then down and across the A70 onto quiet country lanes again. By this time the rain had more or less stopped and it was brightening up. The road gently undulated and wound it’s way along the river valley to Sandilands where we crossed the river – called Douglas Water and made our way down towards the River Clyde. 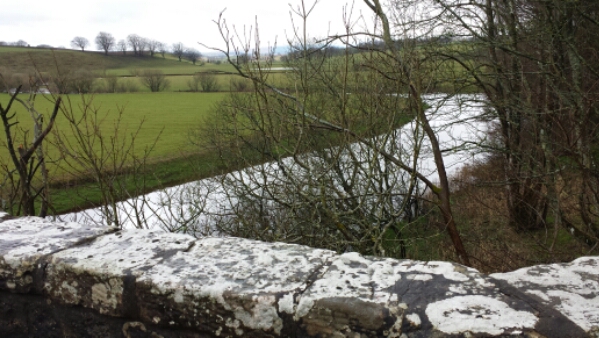 We came to a lane marked Private Road but we took it anyway. 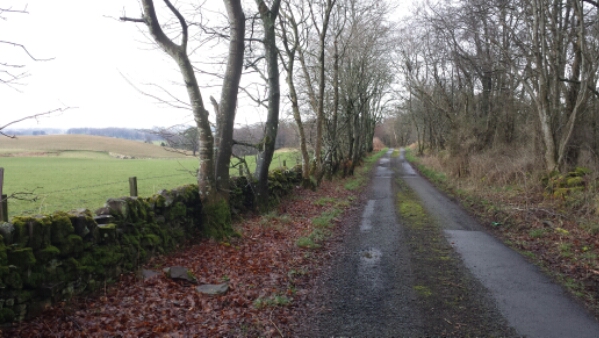 The lane became a track which lead down to some security gates which fortunately was open to pedestrians. 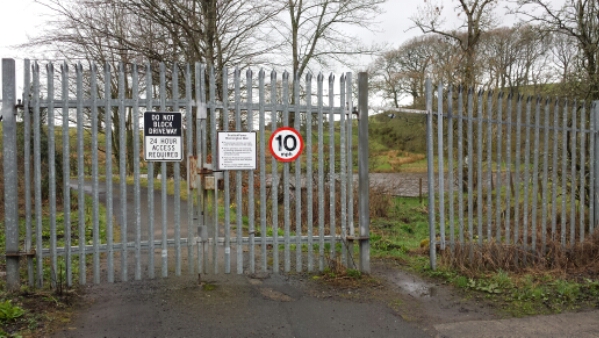 The recent rains meant that the Clyde was in full spate running fast and deep. We stopped for a break and watched the river rushing by.  We could hear the weir before we saw it. 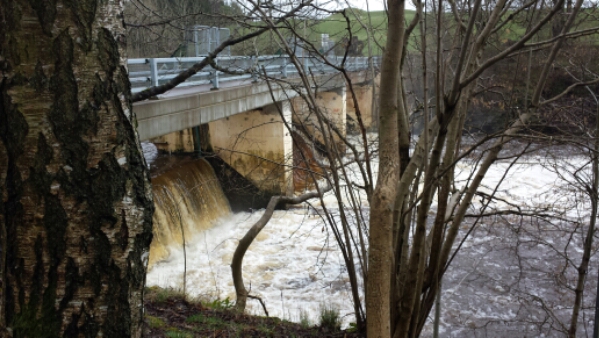 The power of the water here is amazing – some of the water is taken into two huge pipes which run downhill to a power station at the bottom of the Falls of Clyde where electricity is generated. 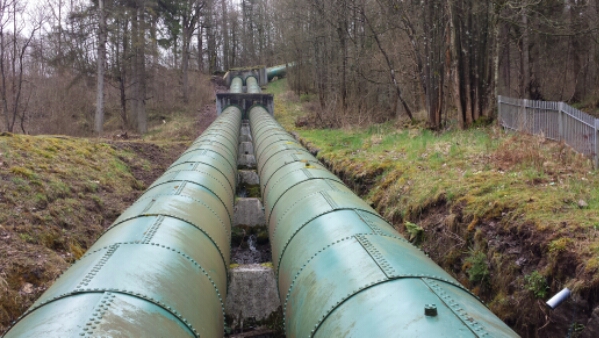 We met two men on the weir, they were out for a walk – Michael Burke and Kent Alston. They told us not to miss going to the Drovers’ Inn at Inverarnan when we walk the West Highland Way. Thanks both and good to meet you.
The weir has a metal bridge which we used to cross to the other side. We could hear the roar of the Falls of Clyde as we walked along a wooded footpath. 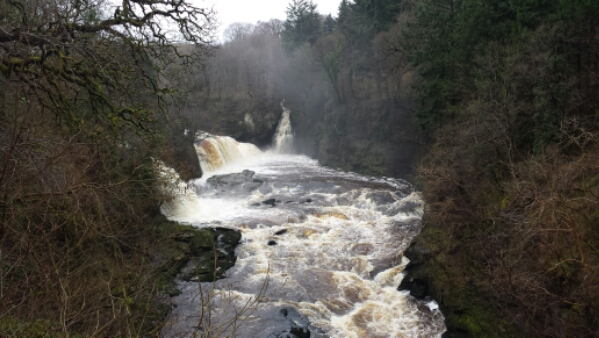 They are breathtaking and I will let some of the photos that I took do the talking. 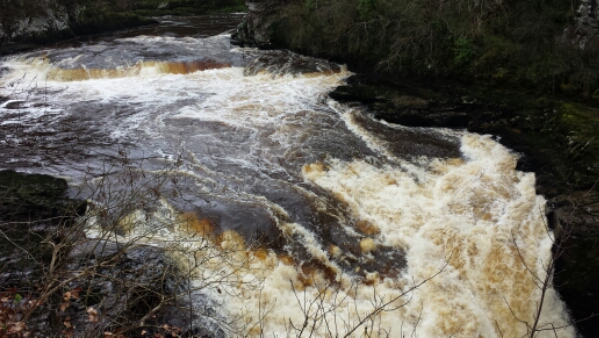 Definately worth a visit although the paths were muddy and slippery in places. 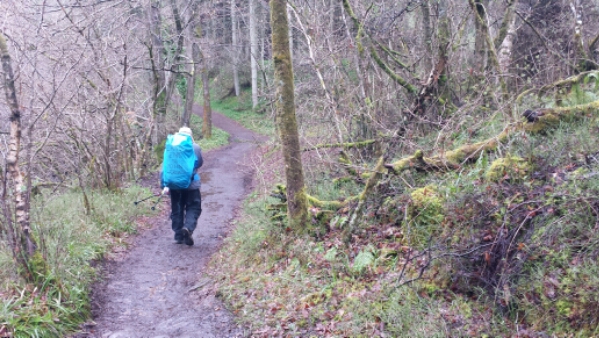 We met the “Killie Chicks” a group of 5 ladies from Kilmarnock (where they say the best pies come from – Killie pies). Sadie, Susan, Elma, Bea and Eva. We enjoyed meeting you all and hope that you enjoyed your walk. 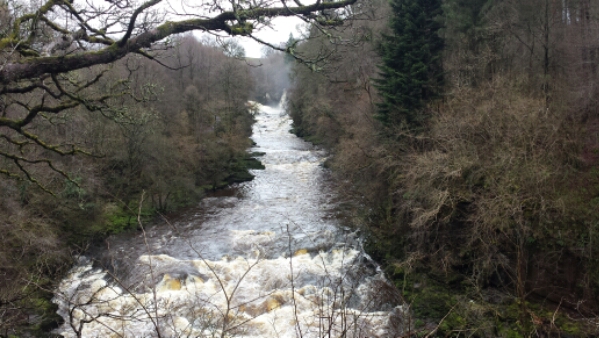 We followed the footpath which led down towards the river and then along a wooden walkway with the river to one side and woodland covered in wild flowers on the other. 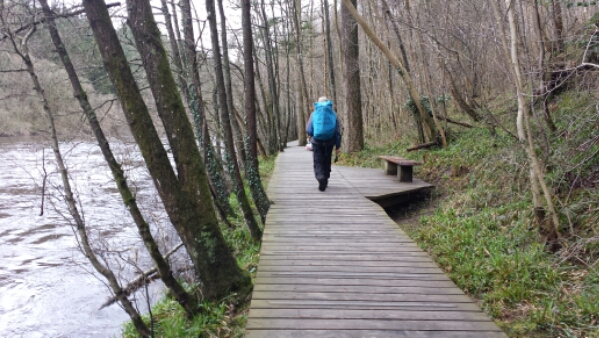 At the end of the walkway we met the “Practical  Volunteers” working on some rustic fencing – Jim, Dave, Denis, Jess and Alex. 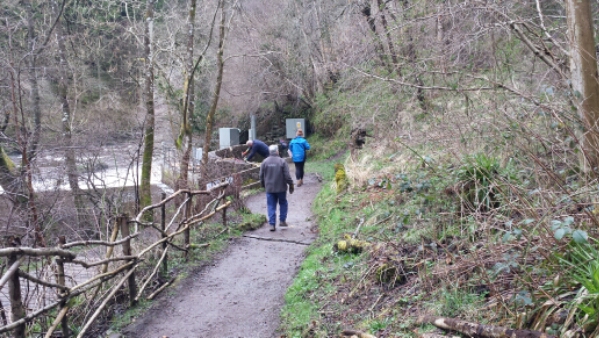 Lovely to meet you all, you are doing an amazing job and Happy Birthday Jess.
Further on we met Filip, Lizzie and Tobias – nice to chat with you. 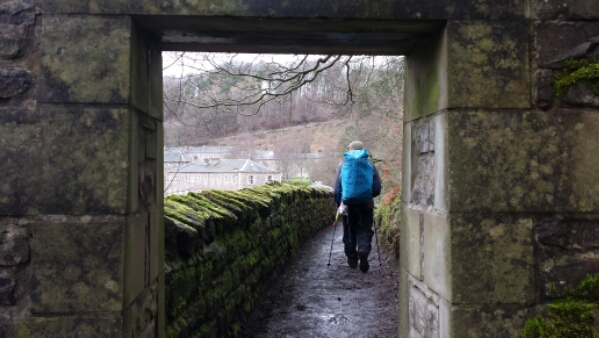 The path took us back uphill through woodland until we got our first view of  New Lanark cotton spinning village through an opening in a wall. 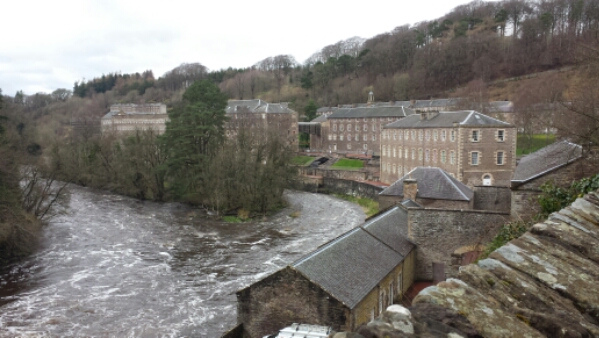 Founded in 1785 it became famous internationally and was successful until it’s closure in 1968. Restorations by the New Lanark Trust started in 1978 and it is now a World Heritage Site.
Whilst there we met Gordon one of the maintenance crew and Laura Preston the Ranger for the Clyde Trail and Nature Reserve. She is about to do the 100 mile Kintyre Walk – good luck Laura and good to meet you both. 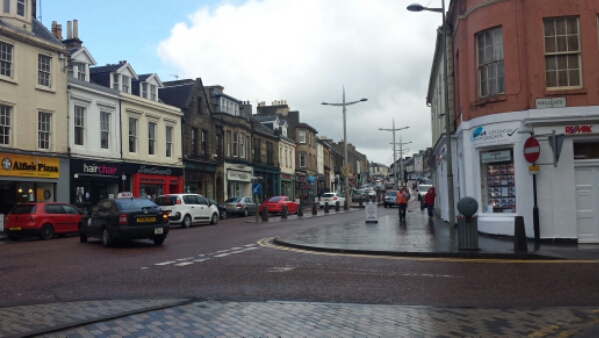 A steep footpath took us away from New Lanark into Lanark itself. By this time we needed a break so went into the Horse and Jockey for a well earned pint! Our walk was finished for the day.
We had arranged to meet our friends at the local Tesco just a few minutes walk away. Elizabeth was just coming out with her shopping and noticed our rucksacks. She gave us a donation – thanks Elizabeth. We needed one or two things from Tesco so while I shopped Dave got talking to Gloria who was handing out free samples of grapes. Lovely to meet you Gloria and good luck for the future. 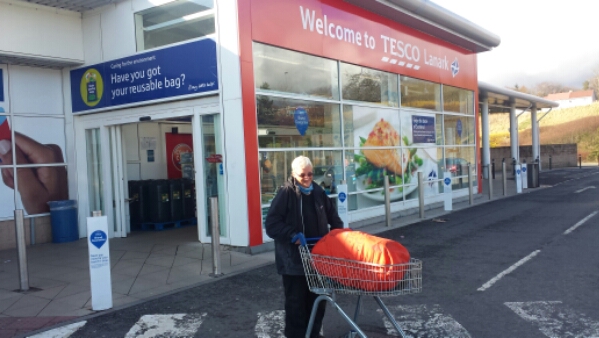 Our friends arrived soon after and it wasn’t long before we were drinking tea in their kitchen. Thanks Lyn and George.