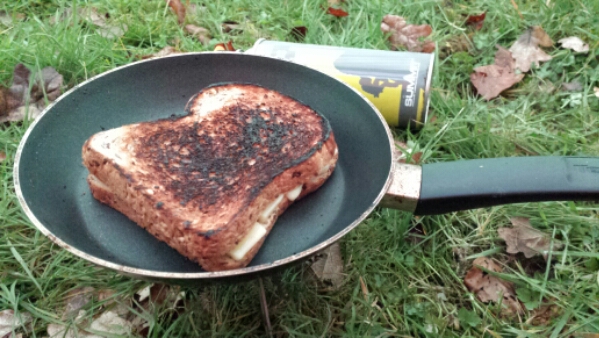 – it was time to replace the battery in Dave’s phone and we realised that the two spare batteries were still in the laundry at Bruce’s Cave Caravan Park where we had been charging them overnight – we forgot to retrieve them before leaving yesterday morning.
We took the tent down and got everything packed away and, at around 7am, we walked back into Lockerbie where we found the Kings Arms Hotel was open. 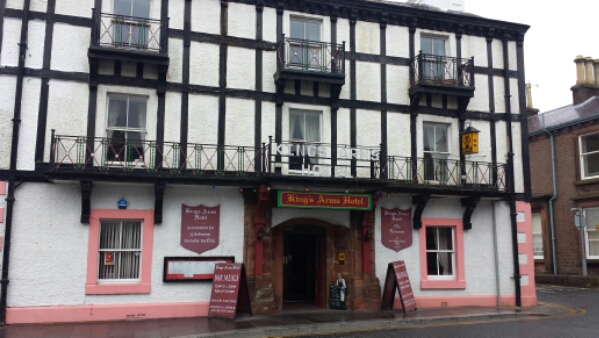 We walked in and I asked if I could sit and wait inside with our rucksacks while Dave got the bus to Kirkpatrick Fleming and back. The answer was yes and we were shown into a room where I was able to sit down and Dave went to catch the bus. I ordered a pot of tea and sat and wrote yesterday’s blog then uploaded it. Meanwhile Dave got the bus to Kirkpatrick Fleming. Fortunately the batteries were where we had left them – phew! He was able to get the next bus back to Lockerbie and returned to the hotel around 9.45.
We thanked the staff at the hotel – looks like a good place to stay by the way. Everyone is so friendly and welcoming.
We finally left Lockerbie around 10 am walking towards Johnstonebridge about 9 miles away. We had light rain and a bit of a breeze as we walked along – such a change from yesterday’s warm sunshine. 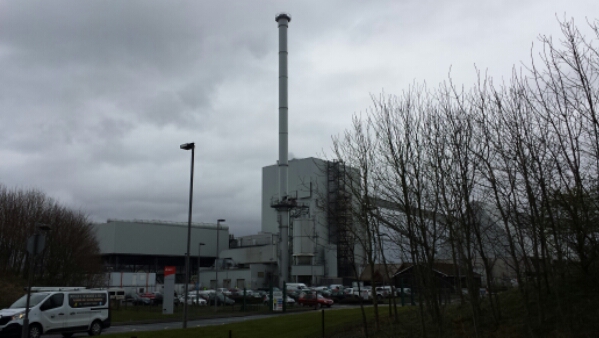 We walked past a power station that uses wood as it’s fuel source. There are fields of willow all around and also at least one timber company which presumably provides the power station with all it’s waste wood too.
The section of road between Lockerbie and Johnstonebridge seemed to be a lot busier than we experienced yesterday. We found out why eventually – it was the Lockerbie Lorry Park. 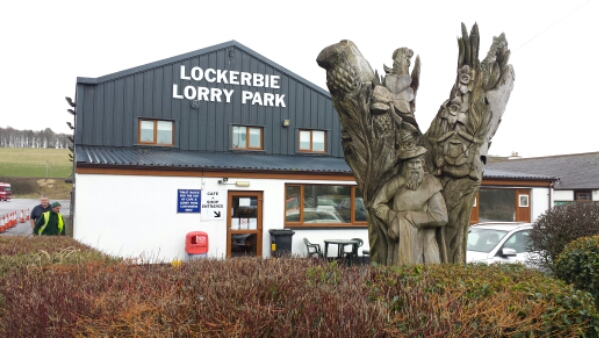 A very popular stopping off point for truckers who come off the motorway and along the B7076 to get to it. We also took a long break there – the cafe is open to everyone. We had two steaming mugs of tea and a bacon roll each – yum! We were also able to charge our phones up too. After two more mugs of tea we reluctantly got ourselves ready to continue on. By now the weather was not getting any better. The rain was heavier and the wind had picked up too. We decided to walk on to Johnstonebridge then look for somewhere to camp. We arrived at a bus shelter and stopped for a short break out of the wind and rain. It was one of those modern ones with just a narrow perch to sit on so not overly comfortable but at least it was dry. Onwards again and now looking for a place to camp as the winds had been forecast to be 40mph later. Our water bottles needed filling up so we stopped at a cottage just outside Johnstonebridge and knocked on the door. We asked for some water and also if there was anywhere nearby that we could camp.
Debbie offered us a space in her garden and Slip filled our water bottles – thanks Debbie and Slip.
The tent was up in no time and we were cosy in our tent. 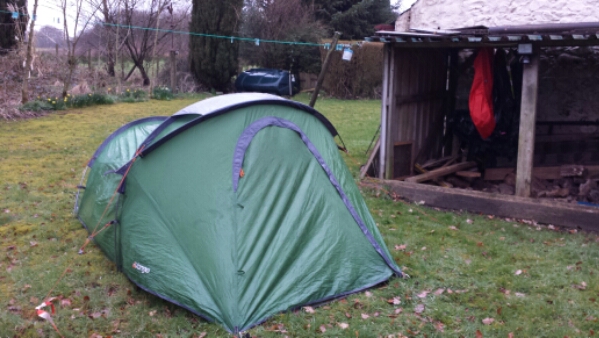 Dave checked that all the tent guy lines and pegs were OK and while he cooked supper we could hear the wind already picking up and howling and the rain pattering on our tent. We had toasted cheese sandwiches followed by spicy beef noodles for supper.