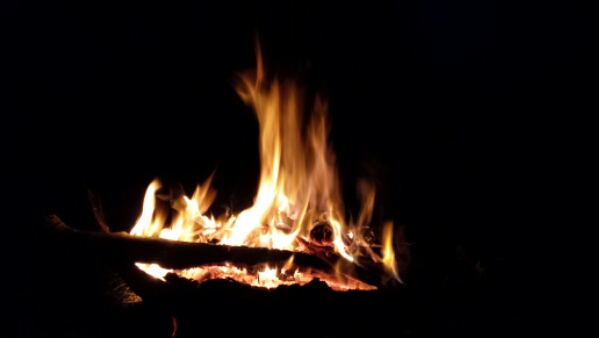 Followed the road to meet up with the Lancaster canal and continue our route towards Lancaster. Joined the canal and stopped for breakfast at a marina with plenty of benches. 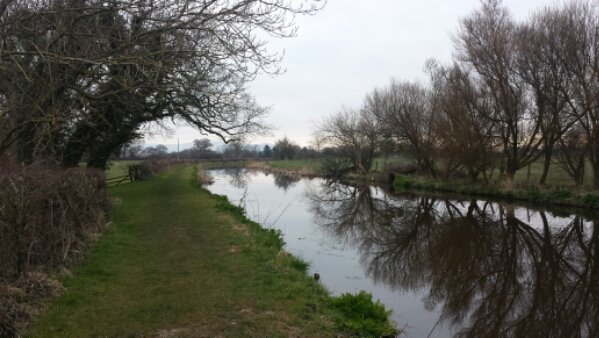 Being Sunday no one was about and we were surrounded by birdsong of all sorts – Jenny Wren, Thrush, Dove, Mallard, the comical toot of the Moorhen (or is it a Coot?), Jackdaw, Robin, Blue Tit. Further on we saw the twirling acrobatic courtship in the skies above us of the Peewit ( or is it the Plover?). The towpath was very dry considering the amount of rain this area had during the winter months. Soon we could see the western Pennines to our right. 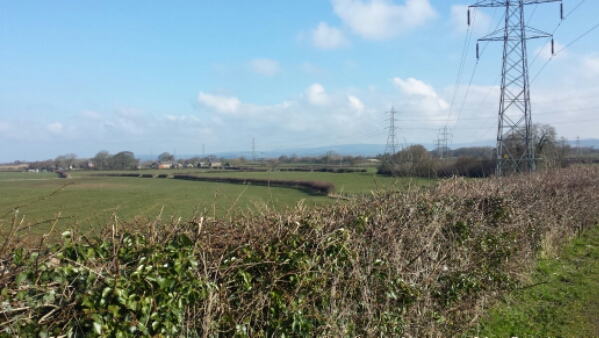 We are following a natural valley route shared between the major roads north, railway line, canal and power line pylons.
Next stop was by a working swing bridge used for moving livestock between fields either side of the canal. 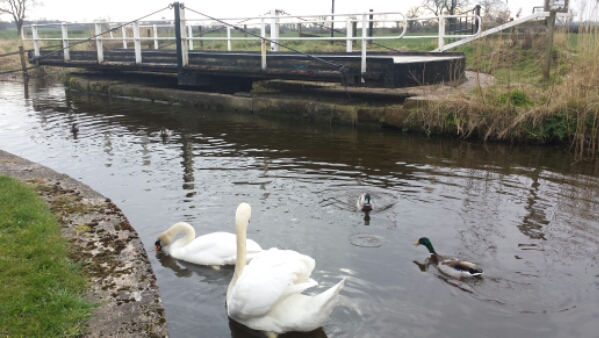 A swan and several ducks came to investigate, no doubt in search of food. Just to the right was a swan sitting on her nest hidden in the reeds. We had a slice of seeded bread spare so spent a pleasant few minutes feeding and watching them. Jack walked by and said he lived in the house by the bench. He kindly topped up our water bottle and said we would see plenty of benches on today’s walk. 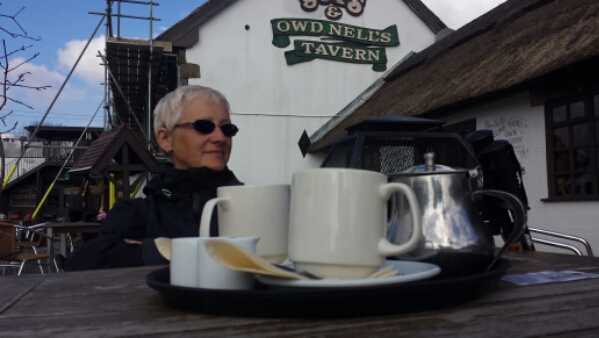 Soon we came upon a restaurant right on the canal at Bilsborrow called “Owd Nell’s Tavern” and Dot ordered our usual tea for two. By now the sun was quite hot so it was great to sit outdoors in comfort at a table and chairs. A small group of walkers were assembling ready to start their days walk. They are the ” Friends of Garstang Walking Festival” group. This years festival will be the 7th to the 15th of May. Today they are walking 9 miles.
Topped up the teapot with some more hot water and decided to rest here a little longer. Refreshed and rested the day got warmer so layers were removed to cool down as we walked on. We’ve noticed there are no locks hereabouts and the canal weaves its way around the contours of the land. 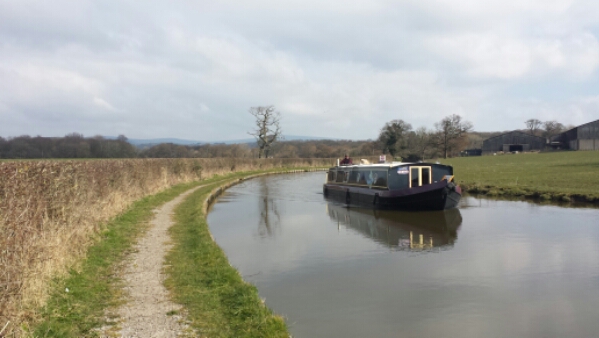 Our next stop was Garston where we planned to get supplies for a predicted wild camp. If we could get the ingredients “Stovies” would be on the menu.
We reached the one mile marker for Garstang and had a short break for a drink of water. (Thanks Jack). The blue sky was starting fill with puffy white clouds, as we were still sharing the towpath with lots of day walkers. Some with dogs, some couples and the occasional lone walker – we met David walking to Broughton. In the background we could hear the motorway as I imagine tinnitus would sound also we heard the sound of a curlew in the fields behind.
As you enter the village of Garstang from the south, the canal is lined with new build houses. After a few old bridges an impressive aquaduct carries the canal over the river Wyre. 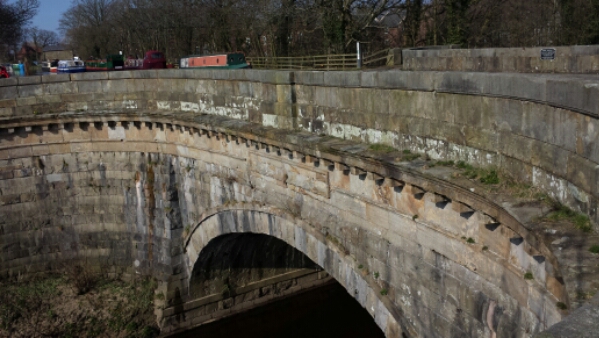 Down a steep set of wooden steps a forest footpath leads into town full of shops. We met Teresa and Maria who were very interested in our efforts so we chatted for a while and we gave them our flyer. Being Sunday most of the shops were closed so we went into the Royal Oak pub in search of tea. 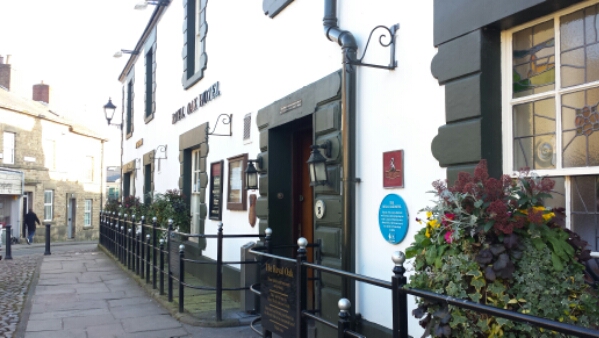 On entering we found a table by a plug socket to charge our phones. Dot has left me here guarding our bags and gone in search of a shop for supplies. Marjory came over and quietly donated £5 for Macmillan.
As we left, a young man was having his break from serving in the hotel. He asked if we were OK. We asked directions for the canal and he pointed us in the right direction. Thanks Jake.
Back on the canal we soon reached a great place for a camp. Moored at the same spot were narrowboaters Alan and Michaela. We got chatting and got on really well. Good luck both and best wishes to your brother Michaela. Also thanks for the coffee, very kind of you both. 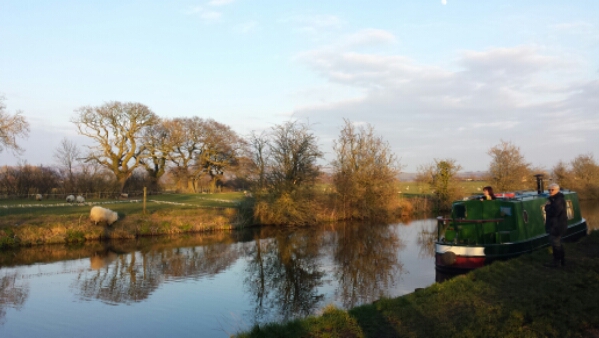 Tent up in record time, stovies prepared, wood for a camp fire sourced by Dot and we were set for a pleasant evening. 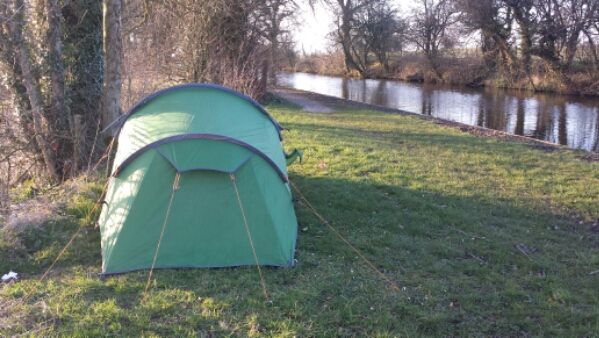 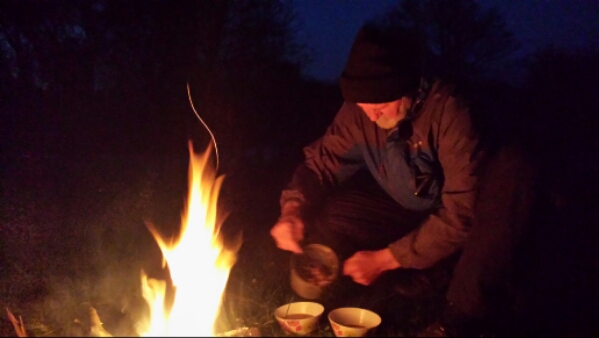