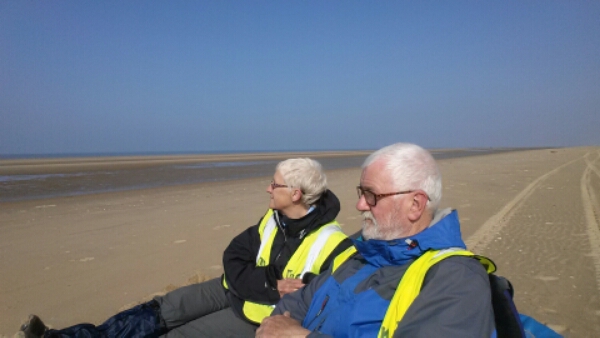 Thursday 17th March 2016 – 601.53 miles
We had an early start at 6.45 and followed the path along the coast until it turned inland towards Hightown

so we turned off left through the sand dunes in the direction of Formby and Southport. We walked a long straight footpath which took us past the MOD shooting range. 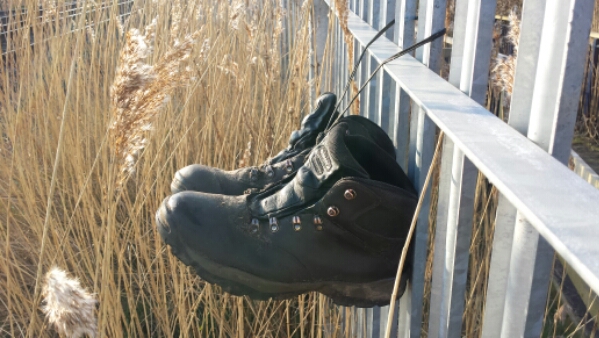 Dave’s new boots have passed muster so we ceremonially tied the old ones to some railings between the footpath and the railway track. Wonder what will happen to them!
We came to Formby and walked through a residential area. To our left was the parish church of St Luke and it was time for a break.

The grounds were stunning. Daffodils and snowdrops were scattered everywhere along the paths and between the gravestones. This was the work of Allan who we met as we sat on a bench outside the church. He is a member of the church choir and of the Augton Male Voice Choir and has sang in the Forest of Dean. He showed us the oldest gravestone in the churchyard dated 1666, and the grave of William Percy French a man famous in his time – he was a songwriter, poet, painter, author and entertainer who died in Formby in 1920. Allan took us into the church. Beautiful in it’s simplicity. 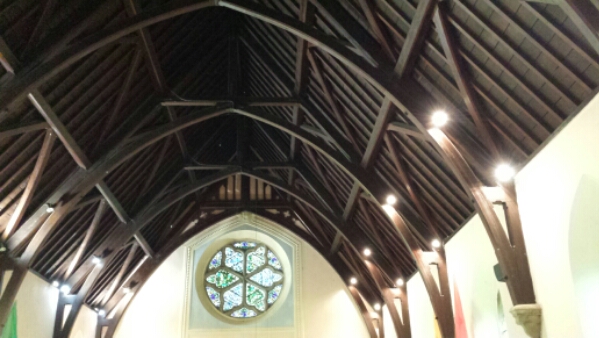 Interestingly the original roof timbers are laminated and constructed in such a way as to allow a much wider span giving the church a bright airy feel. 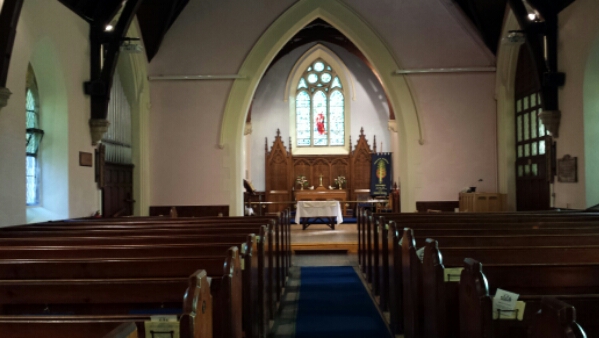 We thanked Allan then went outside again to have a snack. Met a father and son who asked about our walk and we gave them a flyer. One of the ladies from the church Jean came to ask if we would like a cup of tea and some of you will know that our motto is never refuse a cuppa! We met the vicar Harvie Nicol who spoke with us for a while and gave us directions to get back to the coastal path – thanks Harvie it was good to meet you. 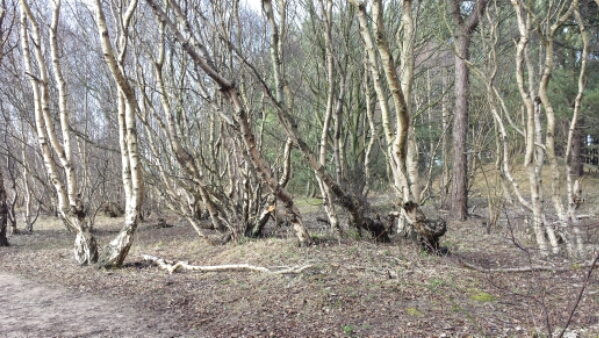 Following Harvie’s directions we found our way back to the beach having walked through woodland and dunes on the way. 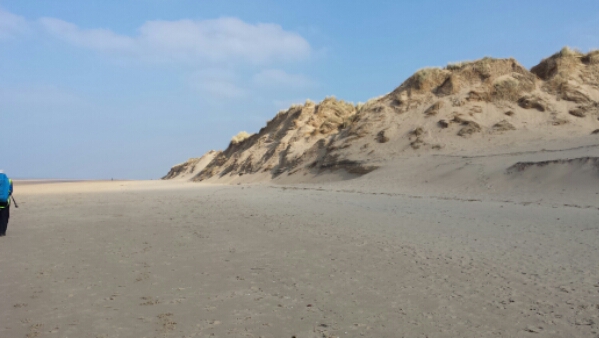 The beach was quiet as the tide was way out. Easy walking along firm sand with the sea in the distance to our left and rolling sand dunes to our right. We continued along Ainsdale Sands then made our way off the beach towards Ainsdale itself. We met a truck driver Richard, who is part of a team which was erecting an RNLI lifeguard station on the beach. He told us that after his grandmother died, his dad and grandad, John and Bob Cowburn, drove a Massey Ferguson tractor from John o’Groats to Lands End in 2002. John in the tractor and Bob drove a camper van ahead to find somewhere to stay each night. Lovely to meet you Richard. We stopped for a brew up – hot oxo. 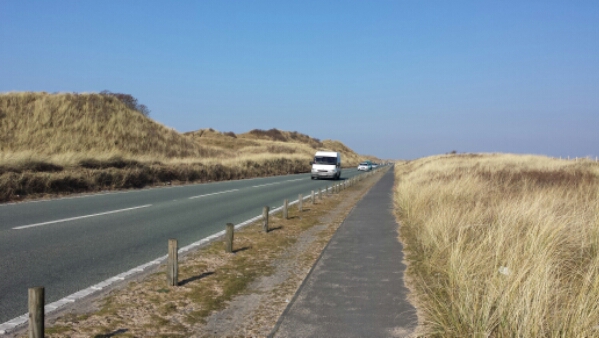 Time was getting on so we decided to walk along the Trans-Pennine Trail to Southport. A long tedious walk along a fairly busy road – ideal for cyclists but not walkers.
Arrived in Southport around 4pm. We decided not to go onto the pier but we treated ourselves to some fish and chips at “The Sandgrounder”. 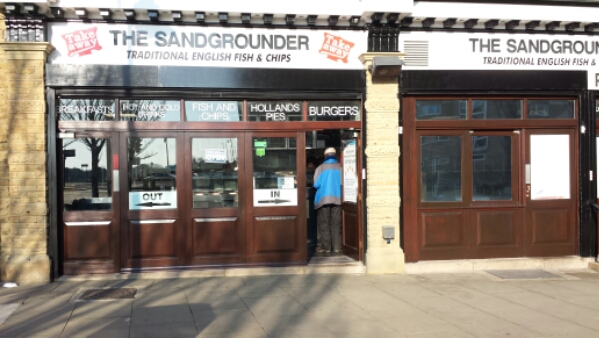 We ate them outside on a bench in the sunshine and delicious they were too. The owner came out and took our photo for his Facebook page.
We couldn’t linger very long unfortunately as we still had about 6 more miles to go. As we walked out of town the houses gradually gave way to countryside once more. 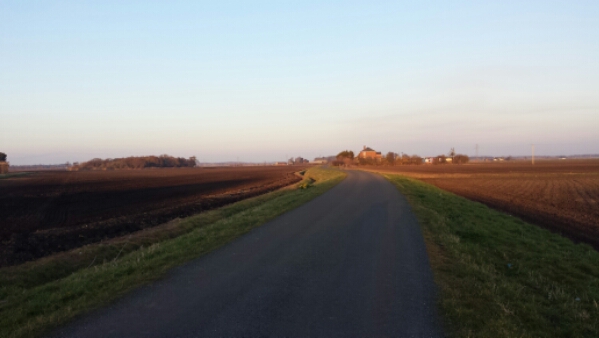 The views across flat farmland divided by drainage dykes put us in mind of the Somerset Levels that we’d walked – seems such a long time ago now. We realised that we were nearing our 600 mile point so, after a quick check to confirm it, we took our usual selfie. 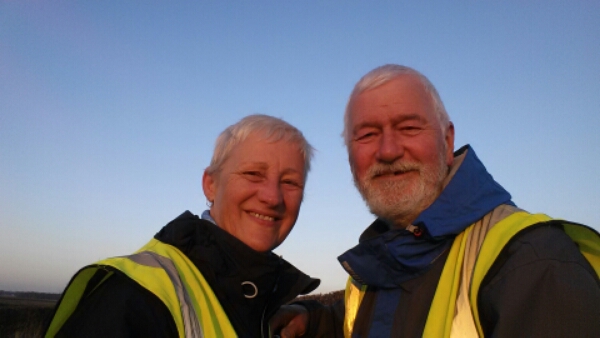 We turned off the road onto a track which would take us to the campsite. 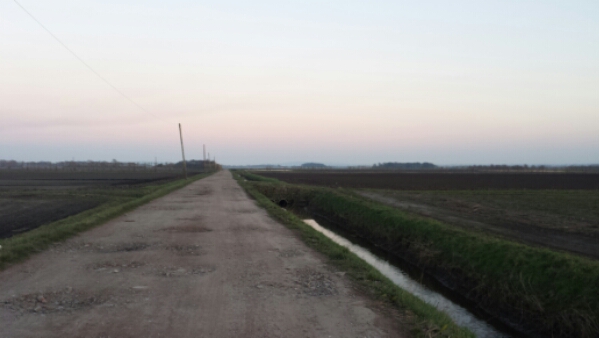 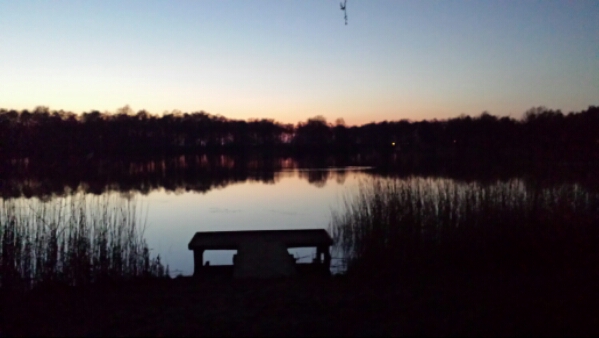