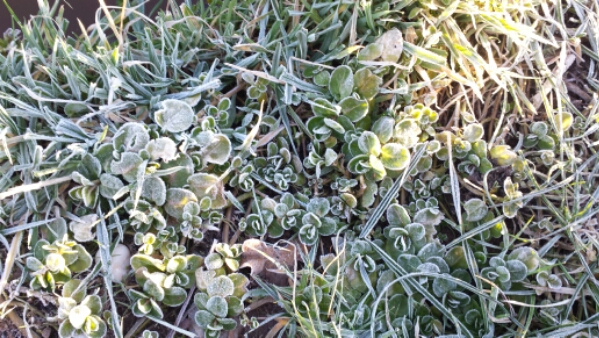 Monday 7th March 2016 – 485.98 miles
Woke to the sound of Canada geese flying overhead just before the melodic sound of Dot’s alarm on her phone – “sea breeze” – quite a contrast and so our day started with a laugh.

We were a bit slow with the tent routine as we hadn’t camped for a few days. We were away by 7.20 though having packed away the frozen tent with our way ahead brightly lit by the rising sun. 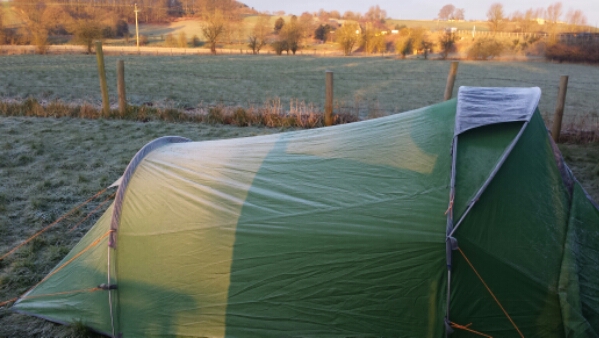 The going along the frozen muddy towpath was easy and our first stop for breakfast soon arrived – cheese sandwich and a glug of water.
The canal was following the contours of a hillside so was elevated on one side with beautiful countryside views to the left. 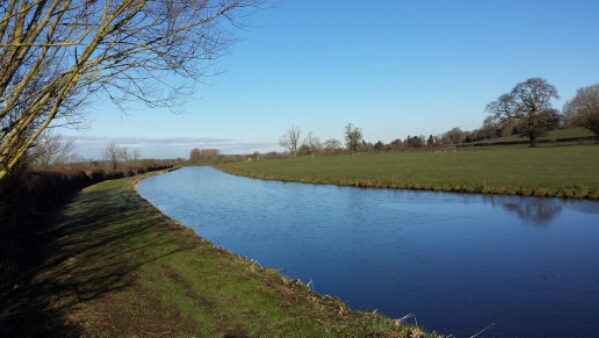 We soon met our first morning walker, Angie with her calm and well behaved Labrador DeeDog. Ange was full of admiration for our adventure and we spent a lovely while chatting. Thanks for the boost Ange.
In parts the canal surface had started to freeze over. Despite the cold the birds and animals were still doing what comes naturally – this swan was having an early morning wash and brush up. 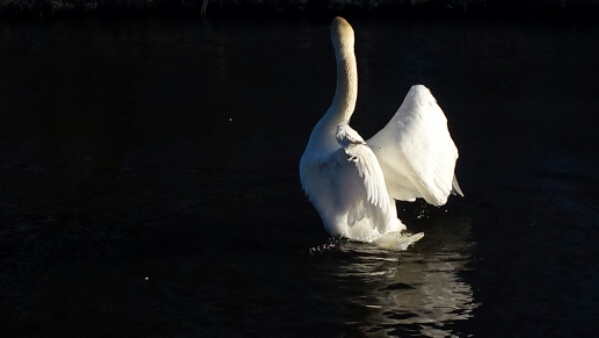 I was letting my imagination wander a bit and wondered how many paces it might be from the start to the end of our walk. I started to count my steps. I roped Dot into my quest and as I shouted out the 100’s Dot would add them together for me. 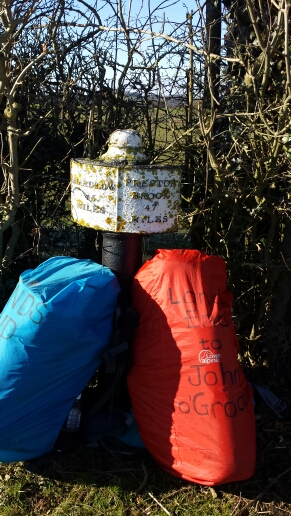 Started counting at a canal mile marker and by the next one the number of paces was near enough 2000. I’ll work out the total when we finish – 2000 x 1200 miles?
We were nearing a small town named Stone. 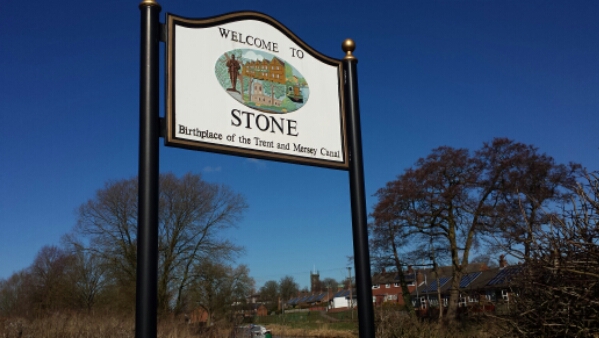 We could see the church tower from the canal and got chatting to a boating resident Neil. He, Clare and Connie the collie had taken to living on their narrowboat 3 years ago. They had sold their bricks and mortar and were happily living their dream. Good luck to you both and maybe we’ll meet up again one day. Within 50 yards we met Lynn, John, Kath out walking their dogs. We gave them a flier and they said they would follow us. As soon as we entered the town we found a place for a cuppa. Oatcakes & Milkshakes was buzzing with young folks and families, and “free wifi”. An hour and a half later having had tea, brunch and coffee we were still there making the most of a great place. Thanks to all the staff at Oatcakes.
Walked into the traffic-free part of town to buy fruit, mushrooms, bread, an onion and 2 tomatoes. 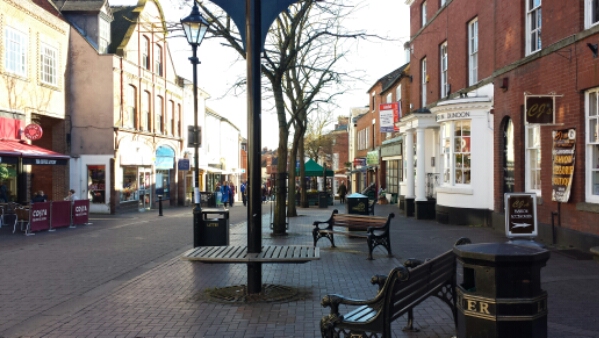 Sat in the sun on a bench next to the war memorial and ate the fruit while we watched the world go by. We walked out of town on quiet back streets with countryside to the right and the valley to our left. 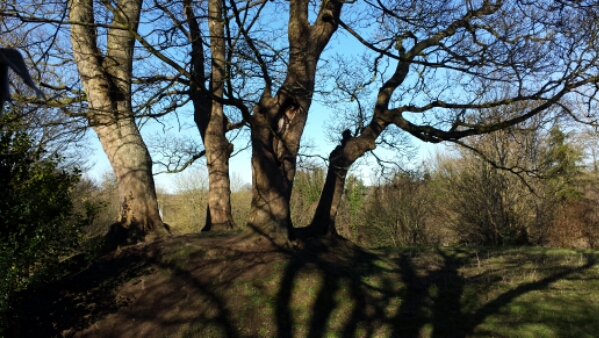 The canal follows a natural low valley between the higher ground and we rejoined it at bridge 100, a crossover bridge taking the towpath from one side to the other. Met a friendly man, Dave, who loved to walk this part of the canal. He told us a about the “Plume of Feathers” pub owned by Neil Morrissey”, actor, which was just a few miles walk away. 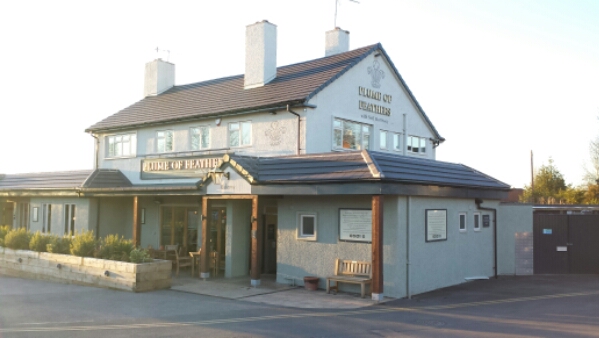 Went in for a pleasant pint. Unfortunately he wasn’t serving but we left our flier with a note hand written on the back. He might respond? 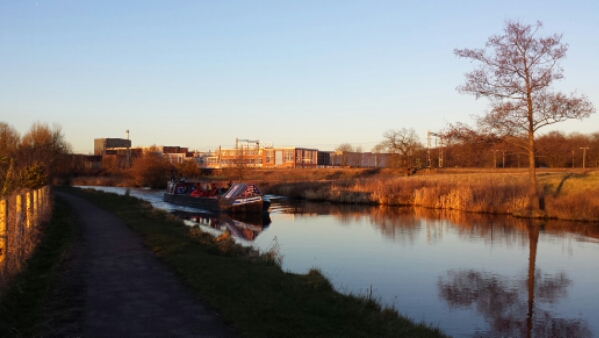 The light was fading so time to find a wild camp. Met a friendly cyclist sat at a lock and he said this was probably the best spot for a while. So thanks for the tip Shaun. Nice to meet you. Tent up, supper cooked and time for a sleep. 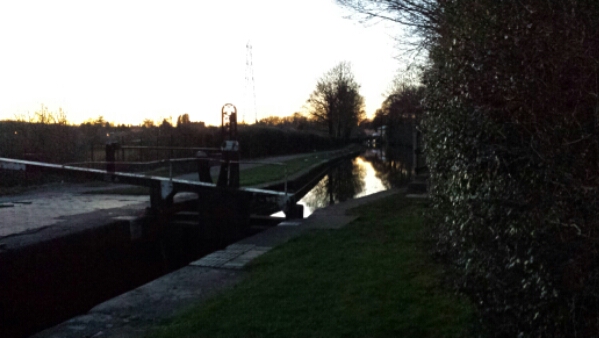