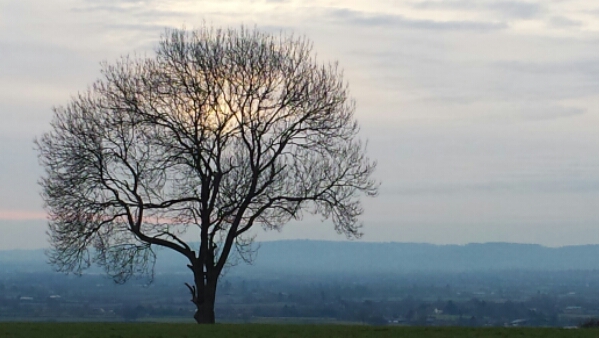 Friday 26th February 2016 – 369.96 miles
Not so cold last night so the emergency bivvies remained in their bags!

Got everything packed and walked down to the shop where we were given hot coffee – thanks Maisemore Apiaries. We had a chat with Steve, one of the staff and he told us all about the work they do – basically everything to do with bees. It was very interesting and we will be back to buy some honey.
We followed cycle route 45 for some miles. A quiet road which snaked along the Severn Valley. Took a short cut and followed a footpath down through some woodland where we heard a woodpecker pecking away, 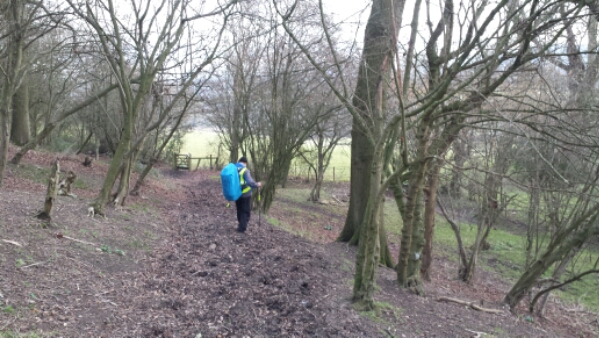 and then through a field full of sheep back onto the cycle route leading to Ashleworth. 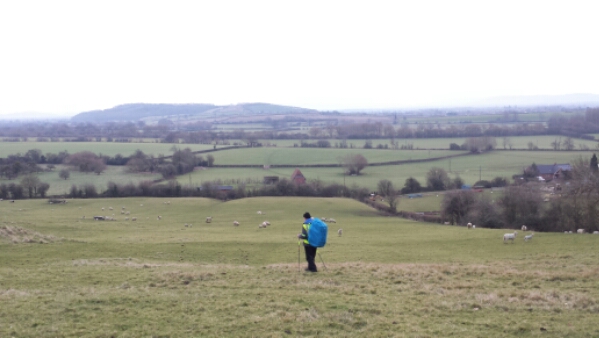 We paused for a while at the Ashleworth Ham Nature Reserve 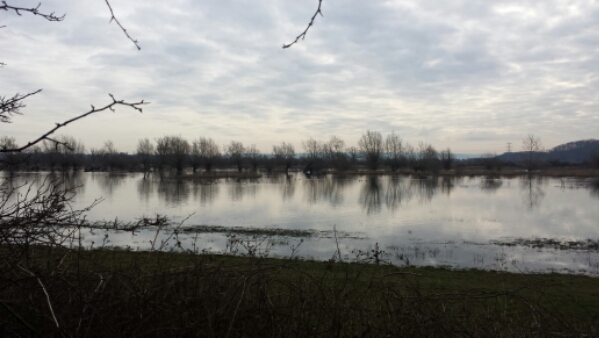 Onwards through Hasfield, Tirley then Town Street where we saw members of the Ledbury Hunt starting off for a chase. The horses and riders were impeccably groomed and wished us good luck. We met craftsman Colin Franklin who was rebuilding a wall using old bricks – probably 18th century. 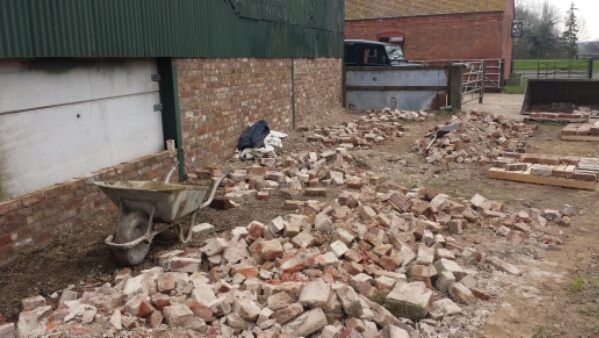 He wished us well and we gave him one of our flyers.

On to Chaceley where we stopped for a break. We sat on a bench outside the church and would have gone inside for a look around but the door was locked. We decided to cut our break short and walk on to Forthampton. We passed by some impressive houses on our way.
An uphill climb led us to the village of Forthampton where we took a break and sat on a bench near the church and next to the stocks 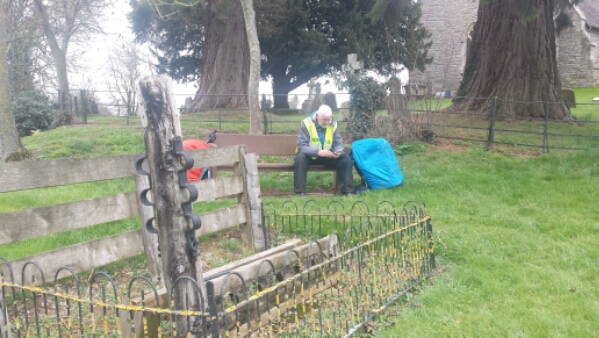 Forthampton is set on a rise above the river. A collection on very old buildings dating back to the 16th century by the look of them. We stopped to take a photo of a wonderful farmhouse.

Which we found out was being renovated by the Forthampton Estate.
A car stopped and Anabel asked if we were really walking to John o’Groats. Lyndon also walked by and we all had a lovely chat. Anabel offered us a place to camp for the night in her orchard and Lyndon offered a corner of his garden. We were sorely tempted but felt the need to get some more miles done as we had only walked 10 miles or so. Thank you Anabel and also Lyndon for your kind offers of help.
Bushley Green was the next destination and we reached it by walking along a tree-lined road with glimpses of orchards through the trees and the promise of bluebells to come in a month or so. We found a bench by the local cricket club so took the opportunity to take a break and admire the view of the wild daffodils. 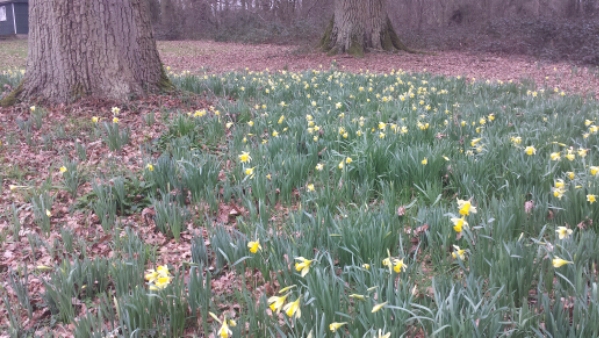 We followed a private road which took us past Bredon School – a boarding and day school which specialises in helping children with special education needs set in beautiful countryside with a view of the Malvern Hills in the distance. 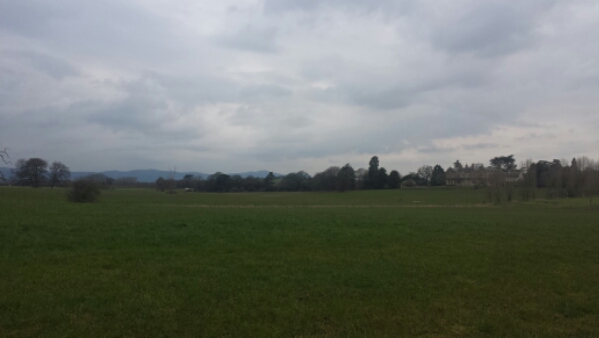 We took a wrong turning and had to ask for directions from a member of staff who was showing two visitors around. The two visitors were from one of the Scottish Islands so were interested in our walk and we gave them a flyer.
The master pointed us in the right direction and so we followed an easy exit towards the small lane over the M50 motorway where we found the quaint parish church of Queenshill. It is a church we have seen on countless occasions as we drove past on the way to the M5 just like the cars and trucks thundering by. 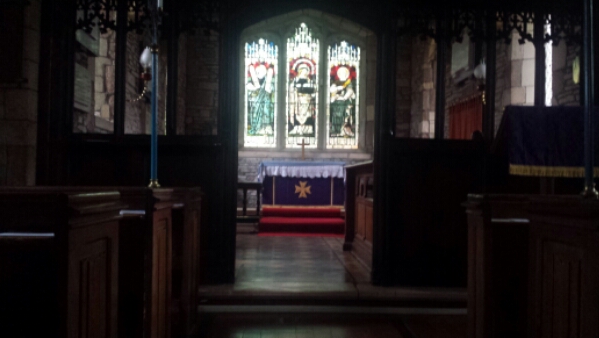 Once inside the church tranquillity returned and we both spent a quiet moment together.
Refreshed and recharged we realised that we had it in us to walk a few more miles. So our next destination on the map was Upton on Severn, a few miles away. Soon the B road into Upton came into view and we followed it till we came to The Drum and Monkey pub at Newbridge Green. The icing on the cake was the sight of caravans and a toilet block in their field. Needless to say we decided our walk had ended for the day. We asked Liz, the landlady if we could camp for the night and the answer was yes. Not only that but she also donated our campsite fee to Macmillan – thanks Liz. Our tent was up in no time (we are quite expert at it now) and Dave cooked our supper. 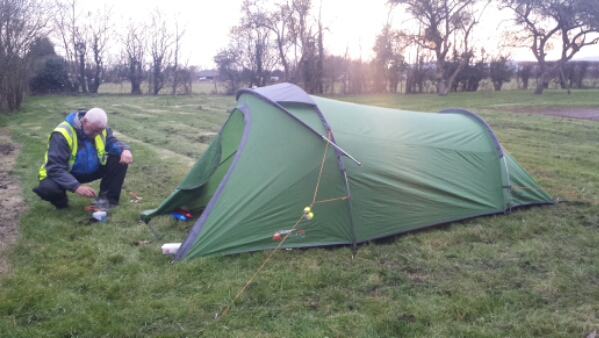 We spent a pleasant evening in the bar. Again this is a good place to come for a meal, a drink or two and also camp overnight. 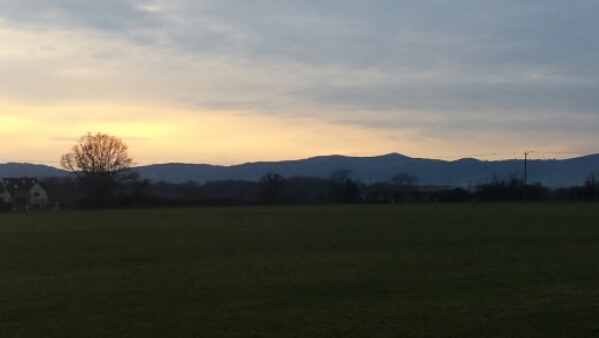