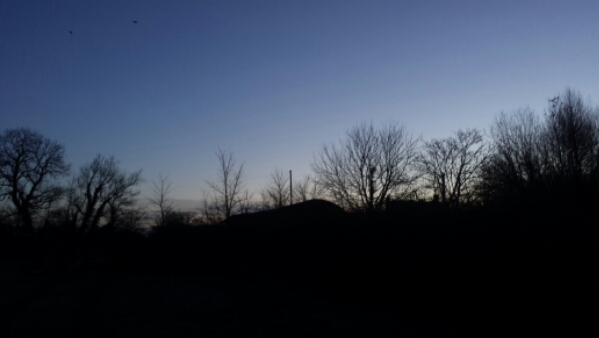 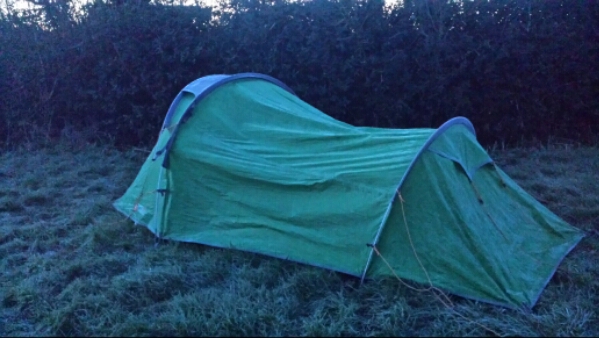 In addition to that, the collapsible tent poles were frozen and Dave had to breath on them to get them apart.
The going was icy in places so we had to watch our step as we walked the quiet country lanes. Within 5 minutes of leaving Walnut Farm Sandra Johnston stopped to wish us luck and gave us a donation too – thanks Sandra.
Walking through Winford, Bryan Daley said hello and chatted about our walk. He invited us in for a hot drink, which we never refuse, and we had a lovely chat over a welcome cup of coffee – thanks Bryan.
Just a mile or so further on we caught our first view of Bristol in the distance and also a glimpse of the towers of the Clifton Suspension Bridge – our planned destination for the morning. 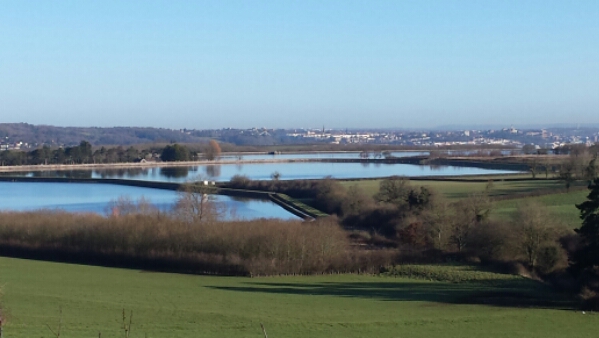 We walked the length of Long Ashton meeting people on our way who wished us well – Paul, Kathryn, and also Vicki and her two children Poppy and Rollo. 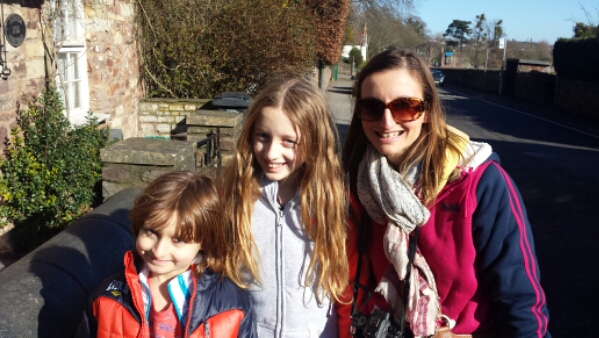 Our thanks to them.
We eventually arrived at the impressive entrance gates of the Ashton Court Estate. What a lovely park. Wide expanses of grassland criss-crossed with wide pathways, beautiful mature trees. We spotted an ice cream van in the distance. We both looked at each other and said “Yes please! ”
Turns out that George the ice cream man comes from Glasgow and he plays in a band called “Blackfire”. We had a lovely chat as he handed over two ninety-nines. 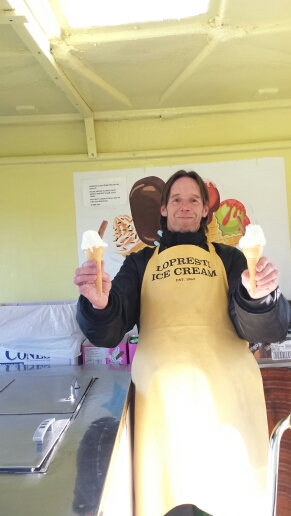 In between serving customers we also found out that he and Dave have something in common – they both learned how to play the drums in The Boys Brigade.
As we stood there, several people chatted to us about our walk and we handed out quite a few flyers to George, Kat and Becky, others that we neglected to get names – thanks to all.
Next stop the Clifton Suspension Bridge – quite a special moment for us. Met Jody and her son Ewan who had done John o’Groats to Lands End in a car between sunrise and sunset on the Summer Solstice. Thanks for your encouragement Jody. 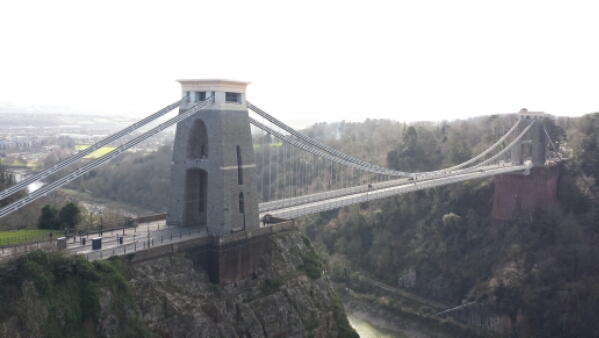 The views across the city and along the Avon Gorge as we crossed the bridge were spectacular. We had our photo taken when we reached the other side.
We followed the Community Path across Durdham Downs and on to Stoke Bishop where we stopped at the Stoke Bishop Fruiterers to buy some fresh fruit and a few veg. Sophie, the owner wished us well as did her customer Susan. She had an interesting question posed by her grandchild – if you put ants end to end from John o’Groats to Lands End, how many would there be? Susan said it depended on your route or as the crow flies. She calculated that each ant would be half a centimeter in length. However she didn’t tell us the answer – over to you?! 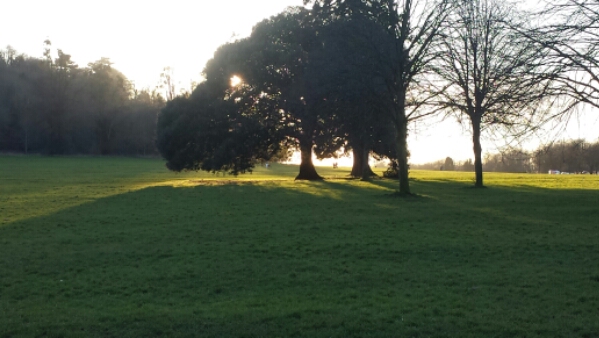 Walked on through Blaise Castle Park and met Will, Sara and baby Reuben enjoying the early evening. We asked them if they knew anywhere that we could camp. Chris came by with his dog and suggested that we ask at the museum. It was closed by the time we got there. Onwards to Henbury and went into the local pub ” The Blaise Inn” to see if they knew of anywhere we could camp. Lovely “real” pub – good atmosphere. Sadly no-one knew of anywhere but we had a pint each and enjoyed the company of a good crowd and had a donation from Lee and Leah – thanks both.
Someone suggested “The Old Crow” just a short walk away. We met Lea outside the pub and she gave us a donation. We also handed out a few flyers. There was no room at the inn so we turned back towards a place we had seen earlier. We bought some supper from Aldi then walked to a small park where we pitched our tent in double quick time in the dark using our headlights to see what we were doing. 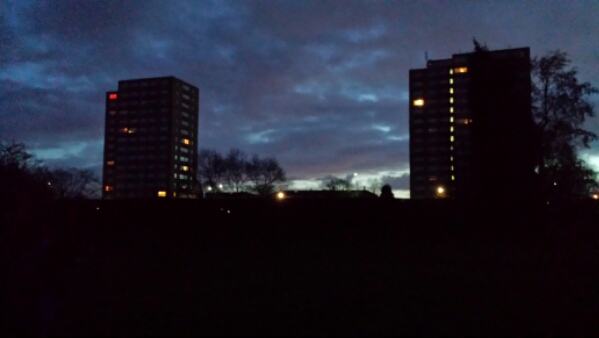 Supper was a tasty curry and rice. Made a few phone calls to relatives then we were asleep in no time.