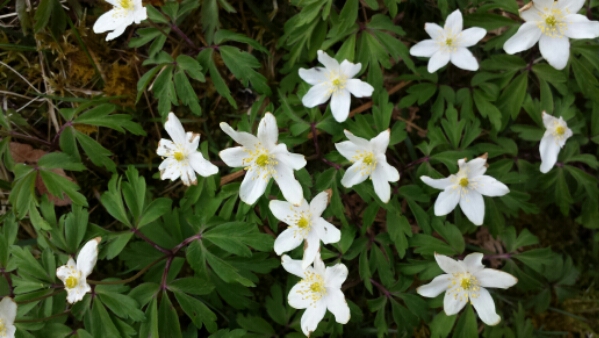 Sunday 1st May 2016 – 1096 miles
We had a little rain overnight but by the time we took the tent down in the morning the slight wind had blown it dry.

We walked down out of the woods and back onto the road again. Sunday today so not much traffic. One pleasant surprise was the sight of an old AA box – Ardgay Box 504. 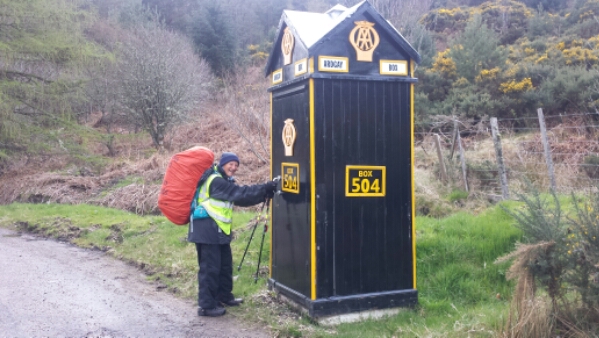 So nice to see it so well cared for. 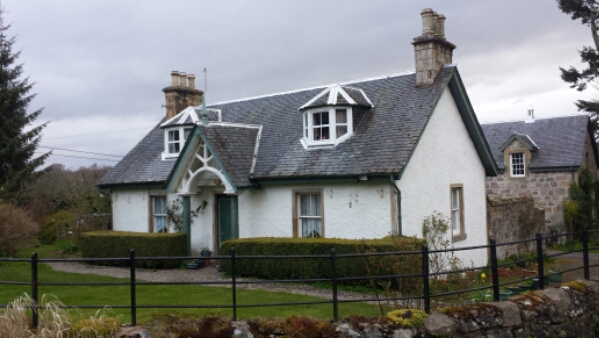 Lovely scenery with pretty cottages and we had beautiful views across Dornoch Firth as we arrived at Kincardine. 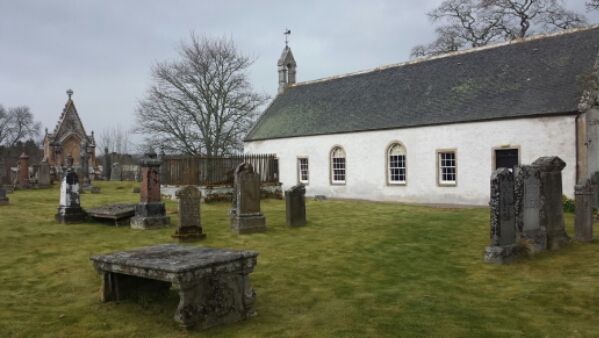 It’s church and churchyard is likely to have been an important place of worship and burial in Pictish times and is part of a historic route called the Pictish Trail.
A little further on and we arrived at Ardgay (pronounced Ardguy) where we were very pleased to see that the Ardgay Stores and Highland Cafe was open so we went in and ordered our usual pot of tea for two. 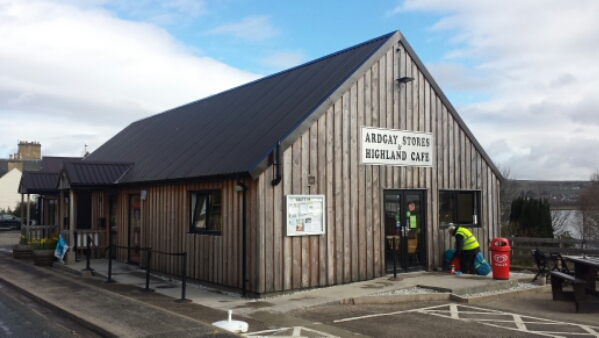 Unfortunately the plug socket was out of action so I was unable to charge up my phone. We did however manage to stock up with food for the next few days and get a new gas bottle too. While we were there the lady in the shop told us that a steam train was due in at the local station at 10am. We finished our tea and paid for our supplies then walked round to Ardgay railway station. Dave got chatting to Malcolm who was waiting on the platform. He is a member of FOFNL – The Friends of the Far North Line and had come to video the train. According to the leaflet he gave us, the Far North Line is a scenic gem with lots of interest for both tourist and rail enthusiast alike. 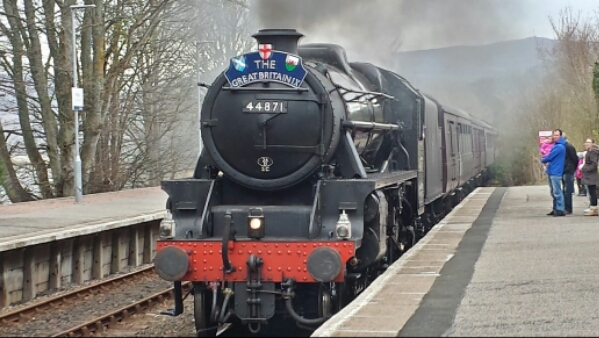 The train “The Great Britain IX” number 44871 arrived at 10.25 but unfortunately it did not stop as expected but I did manage to get a couple of good pics. We said goodbye to Malcolm and headed out of town towards Invershin where we planned to stop at the hotel there for a break and a chance to upload our blog. 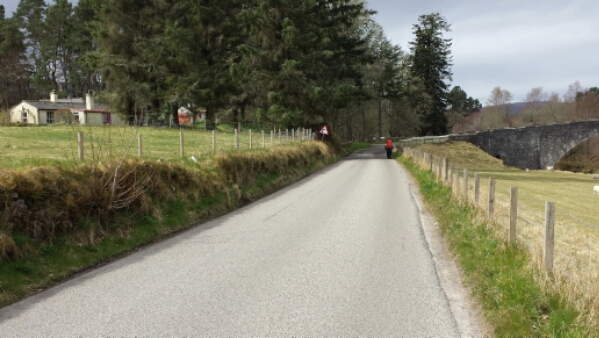 We followed cycle route 1 out of town which took us past some pretty cottages and then over a bridge where we stopped for a break. The sun was shining and very warm. 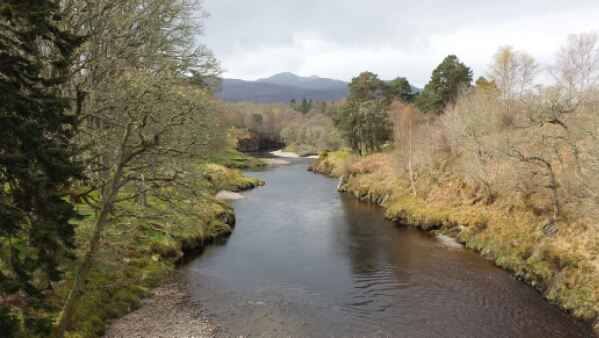 We turned right onto a single track road which undulated up and down following the railway track until we came to an unmanned railway station at Culrain – the waiting room was made using railway sleepers. 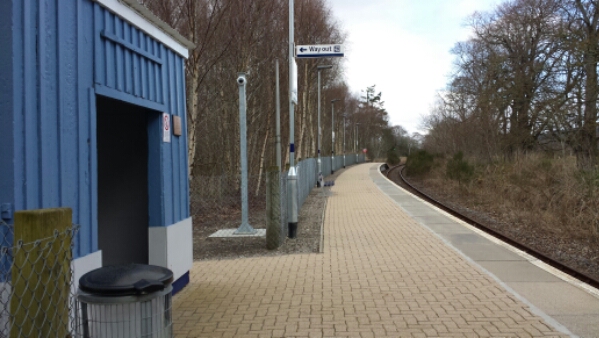 We crossed over the river via a footbridge, opened in May 2000, suspended by the side of the railway bridge. 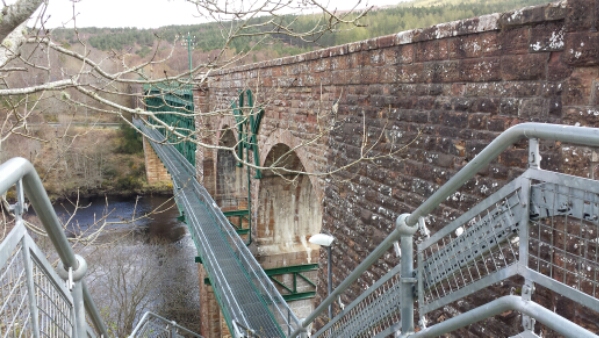 Quite scary walking across if you don’t like heights. The floor of the walkway was a metal grid through which you can see the river way below – or at least that’s what Dave said, I didn’t look!
The Invershin Hotel was just across the road and looked alarmingly deserted.

Yes, you’ve guessed – it was closed. Apparently it quite often is. We were disappointed but made use of one of the picnic benches outside and consoled ourselves by sharing a chocolate bar. 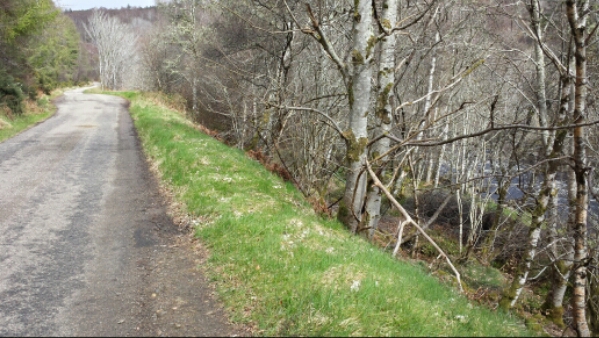 A short walk along a fairly busy road then a left turn onto the A831 and then right onto the B864, a single track road following the River Shin up the valley. We reached the Falls of Shin but chose not to walk down a steep path to the viewing platform. We could see from the road that they were nowhere near as impressive as the Falls of Clyde – we didn’t fancy the climb back up to the road either! 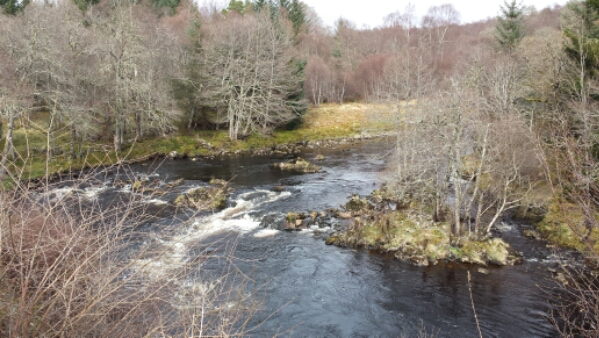 Another couple of miles further on and we came to a bridge where we saw below us a sharp turn in the river and to one side, a bench and a patch of grass. We both said in unison “That’ll do”. We scrambled down an old set of wooden steps and across a small stream and onto the bank of the river. We found a good place just above the river and pitched our tent.

Our water bottles were filled from the small stream and Dave cooked curried chicken noodles for supper. It started raining around 6.30 but we were warm and dry in our little tent.